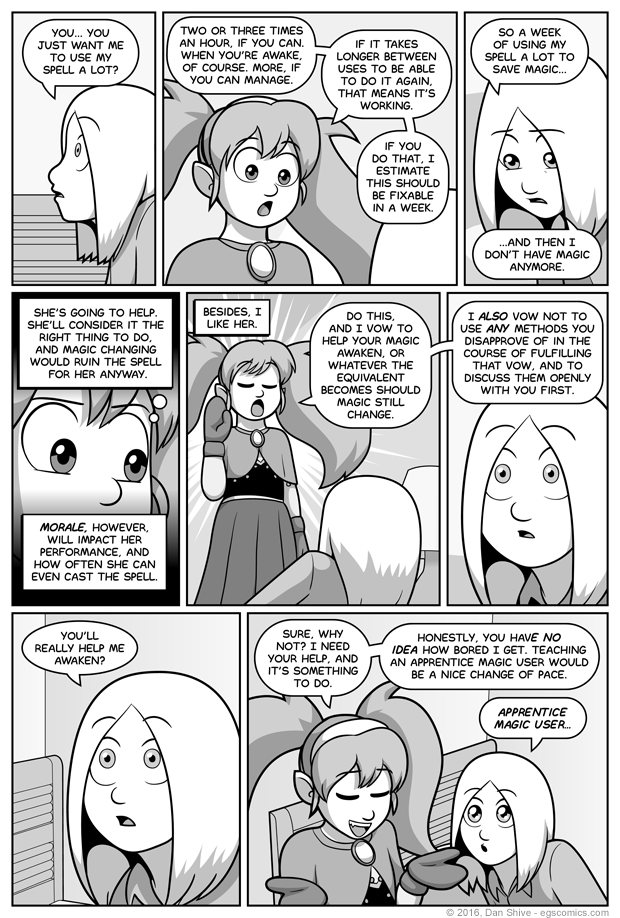 "Do this, and you will no longer be Sarah. You will become MAJOR GENERAL SARAH."

Okay, that's not entirely applicable, but it popped into my head all the same.

I wound up editing the previous commentary shortly after posting it to include reasoning as to why Ellen and Nanase couldn't just fly around in Guardian forms to clear up the excess magic, including a whole bunch of references to back it up.

If that seemed a bit over the top, it's because I originally included a comment about how the guardian forms wouldn't work on such a large scale, but decided not to include it. Then after posting that comic, the first two comments I saw were pretty much about that.

I, ah, was a little frustrated with myself when I wrote that, and it's possible I should've waited for this comic, as it sort of helps put things in perspective.

Assuming Sarah's awake for 16 hours a day and casting the "big chomps" spell 2-3 times per hour over the course of 7 days, that's 224-336 uses just to get things to where it "should" be fixable. That's on top of whatever magic usage Pandora estimates has been going on around Moperville.

When Pandora said "a lot of chomps", she meant it.