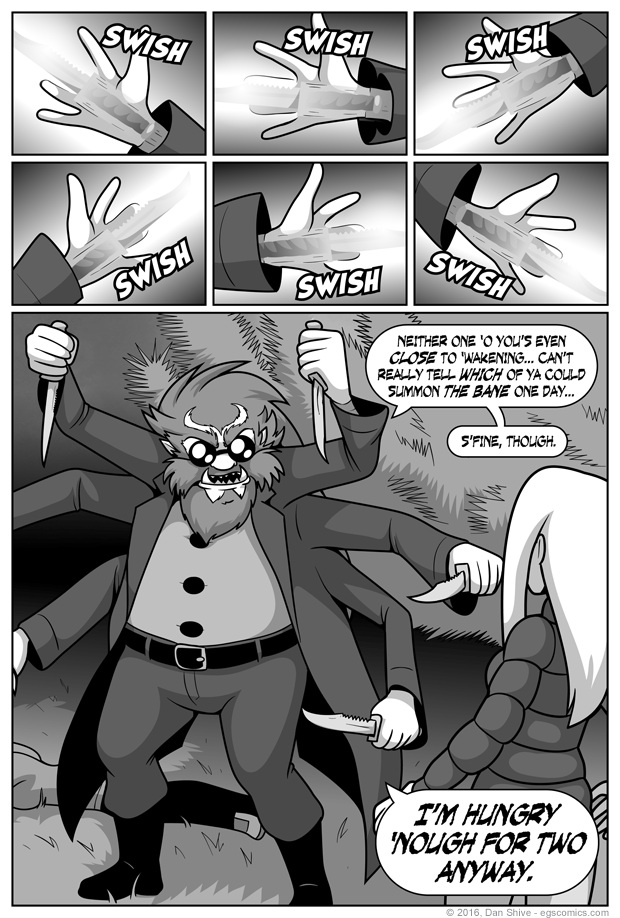 As those who were reading these comics as they updated will know, I wound up delaying this comic a coupld days due to some rewriting. One could consider the explanation of what I changed a minor spoiler (since it's the same as saying "this will not happen in this scene" and elaborates on why), so I'm going to put the explanation below the EGS:NP link and y'all've been warned.

The easiest way to sum up what changed is to point at the dialogue in which this spider guy says neither one of them is close to awakening, and say "that statement would have been wrong."

Which actually doesn't change a lot for this story. I had originally planned for Diane to awaken in response to this guy, but it wouldn't come with sudden fighting know how, and she'd still *basically* be defenseless. The main difference in the short term would have been it taking a comic or two longer before the bad guy got out the knives.

One reason for the change is that it makes about zero sense for Diane to awaken right at this moment. A flair for the dramatice magic might have, but Diane has no training, or even a magic mark. It would be in defiance of everything I've previously established about how awakenings work for Diane to suddenly awaken now.

I knew this on some subconscious level, and nothing I drew sit right with me until I realized the mistake I was making and could correct it.

That, or I was just having an off day, and it's entirely coincidental that I realized I was making a mistake. The "a part of me knew the right path to take" explanation makes me sound like some sort of cool Jedi, however, so let's go with that.

Anyway, that's really the only change, and it's not a big one in the short term given how little it would have helped Diane and Charlotte, but it is significant in the long term, and I think it's for the best for several reasons I probably shouldn't elaborate on just yet. I will eventually, however, because hey, commentary material.