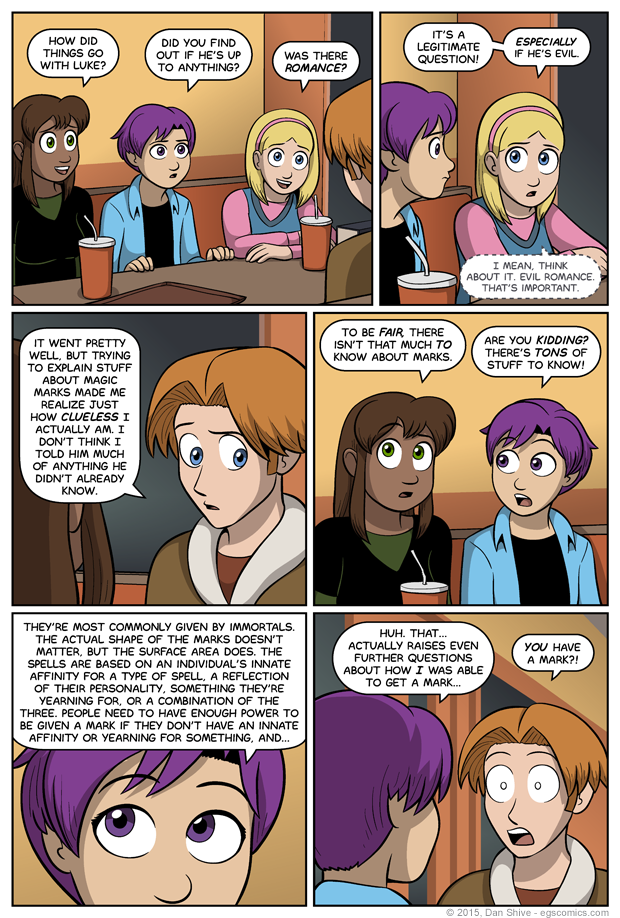 - Surface area
- Yearning
- Out of the loop
- Limited knowledge

Hammerchlorians might just be the most reference-linked story arc ever. Imagine if Susan were in this storyline. It'd probably be even more linked!

Ever have a bunch of errands to run and there's one you have trouble remembering, but you know there's something you're forgetting? That's basically how I've been with this story arc and how much knowledge Justin has. It became a stumbling block writing this part, because I vaguely knew I was forgetting something, but I couldn't remember what. It wasn't until I wrote a version of this in which Tedd brought up his own mark that it became obvious.

Justin really hasn't been kept in the loop. He doesn't know that Tedd can sense how spells work, he doesn't know Tedd has a mark, and it probably hasn't occurred to him yet that Tedd's hair really should be pink right now.

Fortunately, the comic is now done, and all I have to do is... Wait.

Blue eyes? BLUE?! How did THAT happen?! No one must ever know... Better fix that before I upload the comic itself. Keep that mistake a secret. FOREVER.