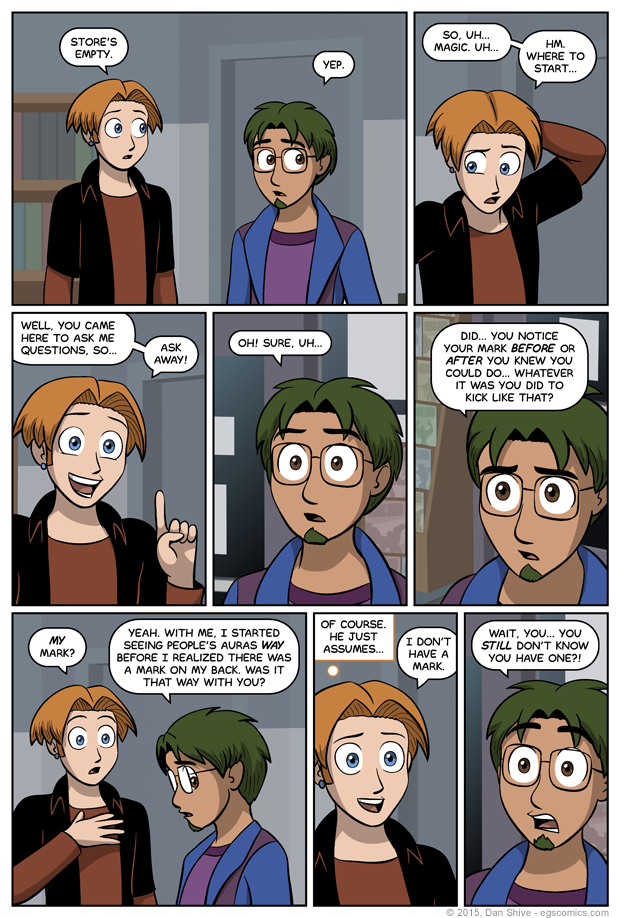 One may judge Justin's approach here, but it's actually the sensible thing to do. He doesn't know how much Luke does or doesn't know. May as well let him ask questions and proceed based on those.

Granted, it's entirely possible Justin hasn't thought that bit of wisdom all the way through and is just grasping at straws because he doesn't know where to begin, but that doesn't make it any less sensible.

I went back and forth on whether I wanted them to be standing or sitting at the start of this conversation. There are a few reasons I went with standing, and perhaps it isn't all that interesting to note, but I'm bothering to bring it up because I started doing a layout for standing, then switched to preparing to having them sit, then went BACK to standing, and... Long story short? It ate up way more of my time than it should have, so I may as well make the most of it and fling my epic tale of "standing Vs. sitting" into this commentary.

Some of Part 3's commentary is also done.

Clearly there are still sketchbooks for December I need to finish and post. I will be posting them as I complete them instead of posting them all at once, as it leaves me with a bunch of commentaries that are difficult to get to. Speaking of which, finishing some recent sketchbook commentaries is also a priority at the moment right behind regular updates and the actual sketchbooks that need finishing.