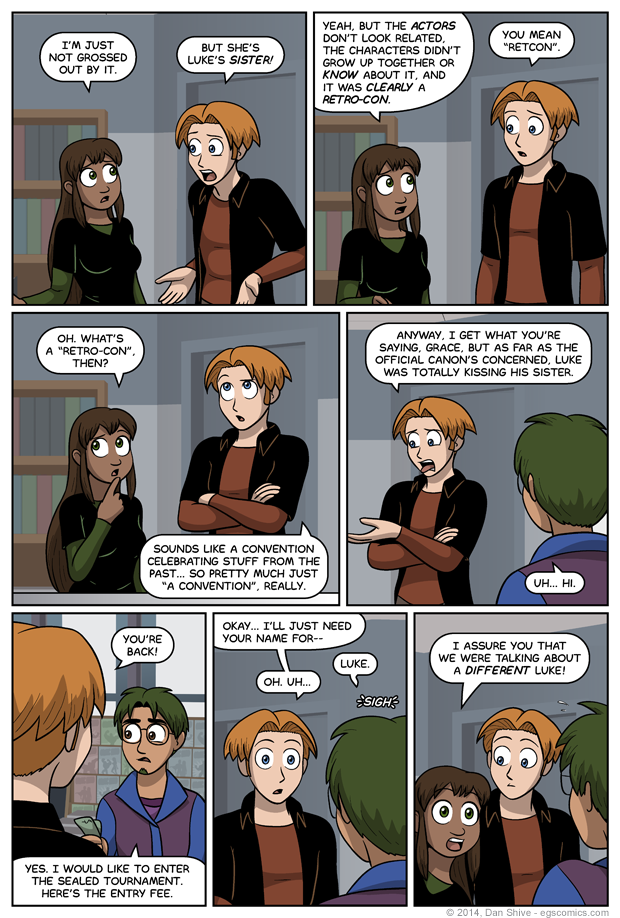 "You can't talk about something like that!" I'm just talking about Star Wars! "We can dig it"

Luke is not named after Luke Skywalker, though I did finally settle on that name on Star Wars day (May 4th, as in "May the Fourth be with you), so I can understand if people don't believe me. Luke Skywalker is, however, nonetheless partly to blame.

I was searching through possible names using a bunch of criteria (popularity, meaning, etc), and I saw Luke during a search on popular names. Curious as to its meaning, I checked it out, and Luke apparently means "light", and here I am with a dude who sees auras and is about to be stuck hanging out in a comic shop. I felt there was little alternative but to go with it.

First off, um... Belated spoiler warning, I guess? It's one of those bits of Star Wars movie trivia that people tend to know whether they've seen them or not, so I decided to just go ahead and have them talk about it, but still. At least I didn't say who the sister is! But I may as well do so, seeing as there's like two human women in the original Star Wars trilogy, so I'm just going to go ahead in the next paragraph.

Anyway, I'm basically in agreement with Grace in that it just doesn't really gross me out or bother me that Luke and Leia kissed, but I only just realized earlier tonight the main why I'm so apathetic about it. Everything Grace says is true, but the main reason I don't care is that none of the characters care.

There's no evidence of anyone being bothered or harmed by the fact that it happened, and without that, I can't really have any strong feelings about it. Their emotional responses are what would make me care. Without them, I simply do not care beyond it being something to talk and joke about when discussing Star Wars.