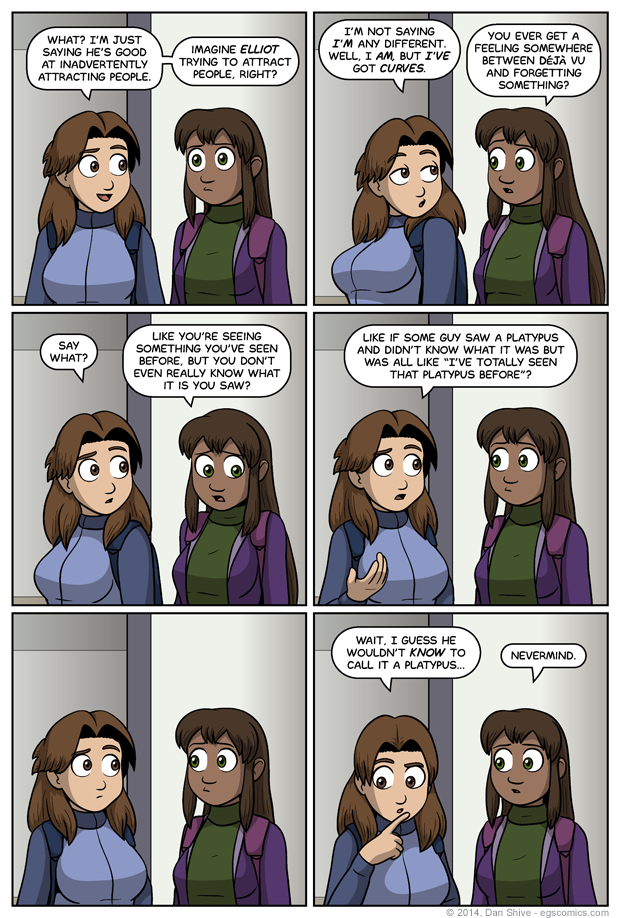 If you were confused as to what exactly Grace was noticing in the previous comic, congratulations! You're just as confused as she is. Well, maybe slightly more confused, as she hasn't really clarified it any better than that mess in panel three yet, but I assure you that confusion is presently by design. Go forth, and be confused!

What, that's only one paragraph? Hmph. Let's see...

Oh! Speaking of curves, I've been trying to make some of the characters designs a little more bulky lately, Ellen included. Some characters are supposed to have more narrow figures, such as Susan and Diane, but there are others who I feel should have more overall mass than they've had in the past.

That said, their coats are adding some thickness at the moment, so maybe I chose a poor time to point this out. Nonetheless, it is a thing that is happening. I'm also trying to make Nanase look more athletic, which is a bit tricky. I want to portray that simply and without making her muscles too big, as an intent of her design is a build built more for dexterity and speed while nonetheless being absurdly strong. A female character with more of a bulky build might actually be cool someday, but it isn't really fitting for Nanase (and Grace can pretty much make that happen at will, anyway).

Feedback, as per usual, is welcome.