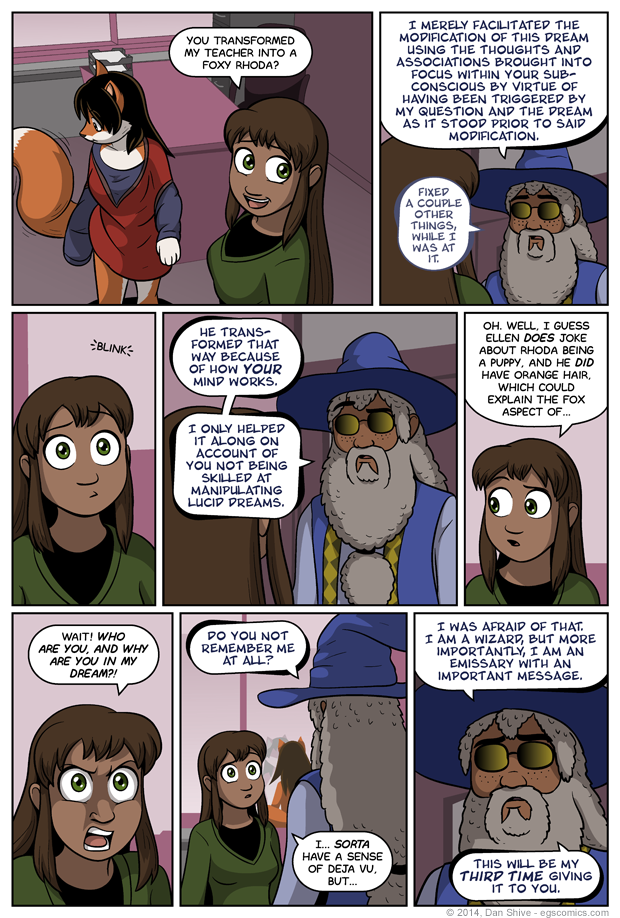 I had a bit of artist's block with this comic, if that's what one would call it, and there were two primary issues that were giving me a (quite literal) headache while making this comic.

The first was that Grace's shrunkiness (it's a word! Maybe) and state of dress (if one could call it that) had outlived its symbolic usefulness. I had intended for Grace to gradually return to her normal size and outfit, but staging it was proving problematic, and I wasn't sure how to "gradually" do the outfit part while still making any sort of sense in context. I know it's a dream, but I am sticking to an internal logic, here, however bizarre it may be.

Ultimately, I decided the wizard emissary dude already did one thing, and he could've multi-tasked. It's the same concept of her returning to normal with the teacher "rhoda-ized" and no longer making her feel bad, just faster (and way easier to stage).

The second issue was that I wanted "Rhoda" to be doing something interesting and possibly canine-like in the first panel. I considered many things, and spent way longer than I should have trying to figure out if it was even possible for me to draw her scratching her ears with a hind leg (fun fact: I failed miserably).

Ultimately, I found her doing anything too overtly canine-like a little too weird, and it also didn't quite fit given that her behavior was being dictated by Grace's mind. The initial barking moment, sure, but Grace is frequently fuzzy. It'd be weird for "Rhoda" to wind up too animalistic with Grace's brain at the helm.

Side note: I know some of you probably scoffed at "frequently fuzzy" a couple paragraphs back, but please note that I'm going to make an effort to have Grace be fuzzy more frequently in the future.