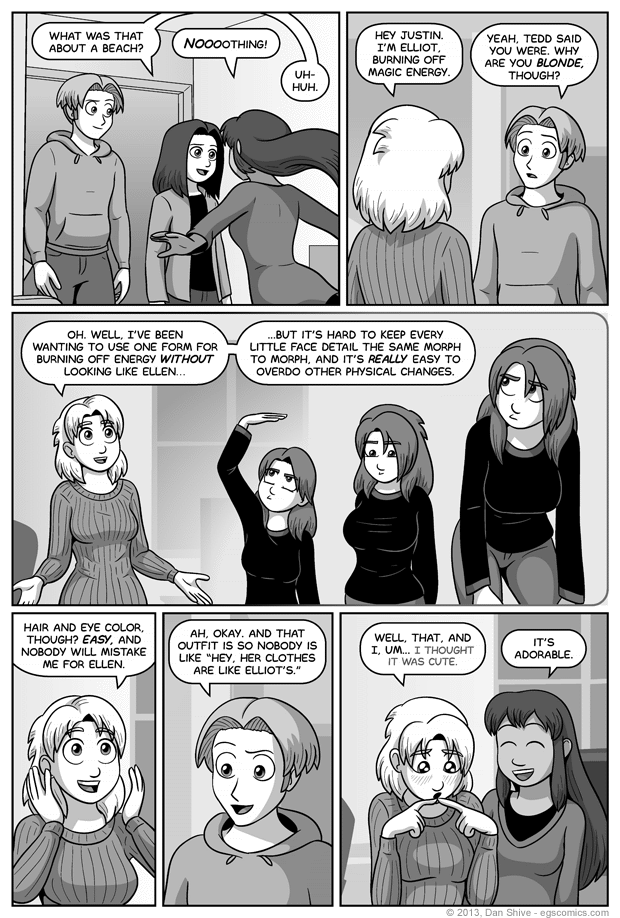 If the appearance of Justin and Tedd seems sudden, or if you just want some "blonde Elliot" reference links, check out the previous comic. You can see two sets of legs descending the stairs in the last panel. Tedd presumably letting Justin in also explains why Elliot and Grace were alone together.

Anyway, FINALLY, an explanation for blonde Elliot! An explanation that's actually super simple, really. The bigger mystery is what's up with the second example of "overdoing it" in panel three. Did Elliot really consider that at one point? Surely he must have, or else it would be completely gratuitous, and I would never include such a thing.

In any case, all three of those examples are to scale relative to the actual Elliot in that panel. I'm hoping that's apparent without me having to comment on it here, but I figured I should mention it anyway, just in case.

It was tempting to have Elliot say more things that would basically function as disclaimers (i.e. stuff along the lines of "yes, someone might notice that we have similar faces, but they wouldn't then assume anything that we'd need to worry about"), but that would be super unnatural and only there to try and stop nitpicking, so I left like that out.