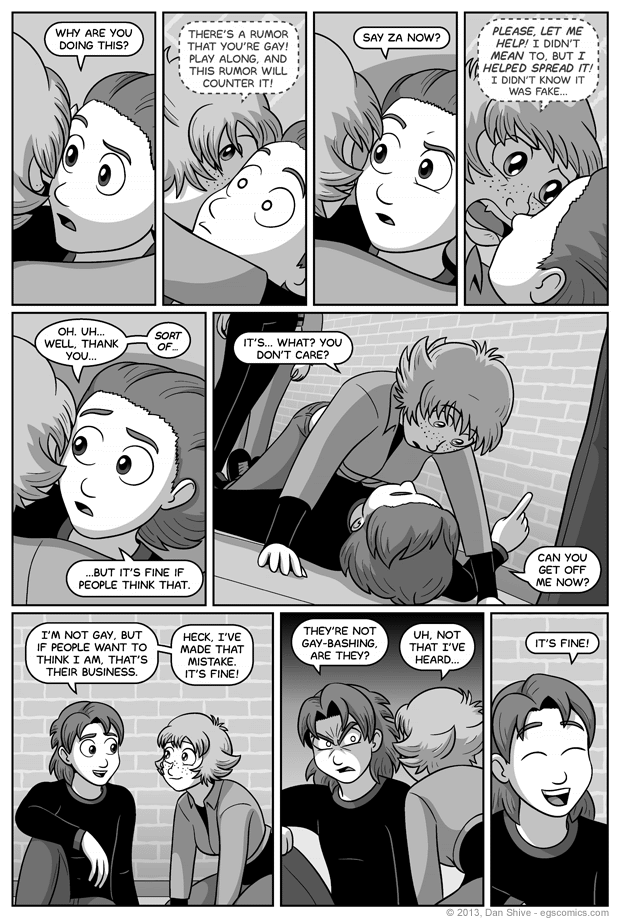 This is yet another comic where I find I don't have a whole lot to comment about. Um... I like angry faces? Yes. That's good.

I will say, however, that I'm well aware that such rumors can be serious business in real life, regardless of whether they're true or not. This depends on individual circumstances, and when you consider Elliot's, I think one should be able to see how he personally would not be all that concerned about it (beyond the whole "more people are paying attention to meeeee" aspect).

On a personal note, I never, ever, EVER understood why so many people had problems with homosexuality. This was enough to cause some issues with at least one friend in junior high. As far as I know, they assumed I was gay based entirely on the fact that I didn't have a problem with gay people and would meekly ask what the problem was whenever the subject would come up for whatever random reason.

I suppose it's possible there were other reasons, but I wouldn't know what if there were. In any case, while I did reconnect with him in High School and was friends with him throughout that, I never did see him the summer between Junior High and High School, and I suspect that suspicion was a significant part of why.

I'm still waiting for a genuinely good answer to that "what's the problem" question.