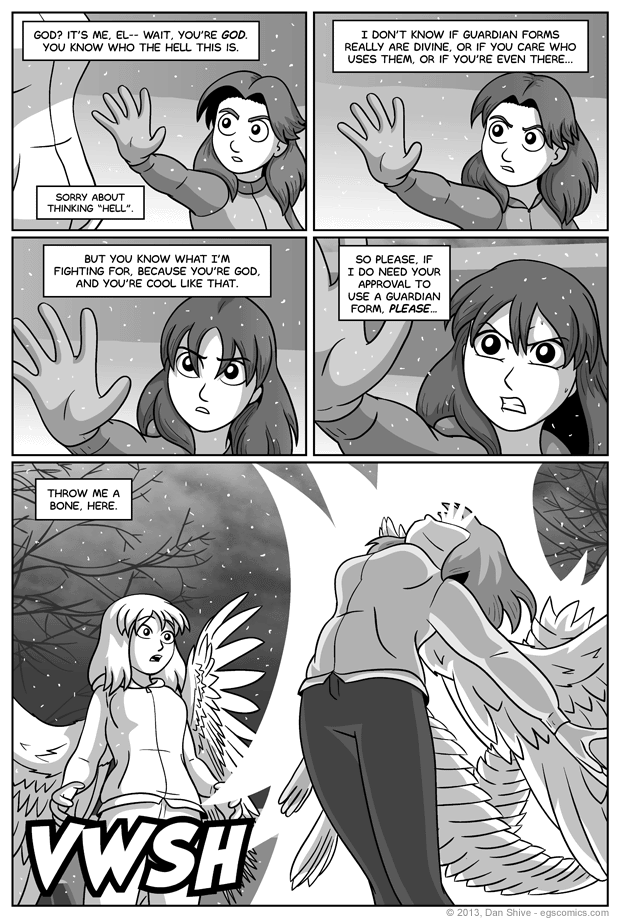 Today's comic boldly answers... Well, neither of those questions, really. Maybe Ellen's thoughts in this comic made a difference, maybe they didn't.

What I think we can all agree on, however, is that Ellen's thoughts while theoretically addressing the most powerful being in all of reality was exactly the sort of William Shakespeare would have written were he alive today.

This was a comic that I thought would be a lot more complex from a composition standpoint, as I figured I'd be showing Ellen changing from multiple angles.

Thing is, while Ellen and Nanase have different body shapes, they are very similar to the point where I'd probably have to show them side-by-side in the same pose and in tight clothing to convince several readers that there really was a difference. They're also the same height, their hair isn't all THAT different in greyscale, they're wearing only slightly different jackets...

Point is, the only area with significant enough contrast to really mean anything was Ellen's face, so that's where I stayed focused for those first four panels. I am fond of the end result, however, and I'm starting to think that, even if there was a more significant difference in their body shapes, that staying focused on her face would have been the right move.