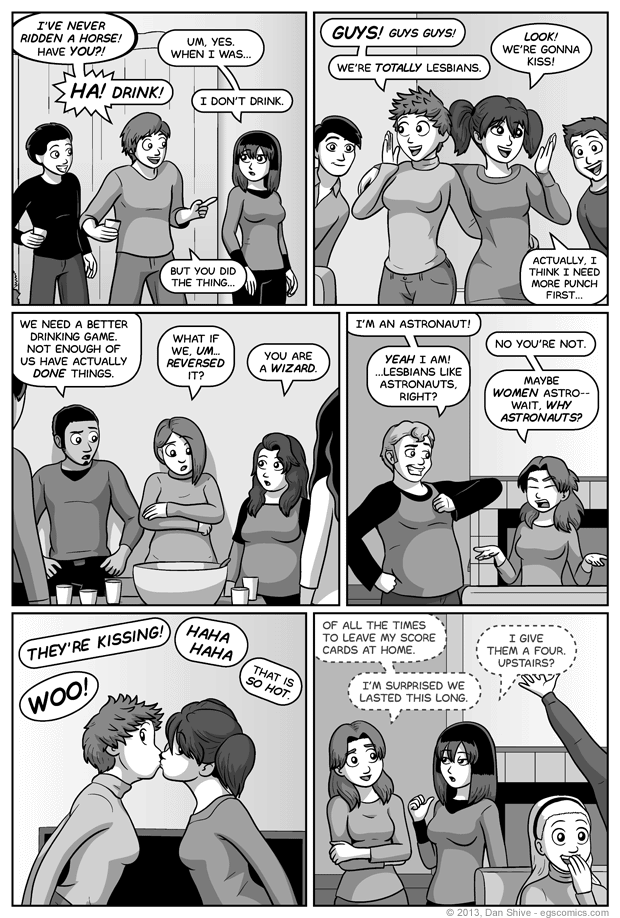 Putting On A Show

I could talk about the whole "putting on a show" thing in panels two and five, but I already did that in Q&A #5 (spanning two commentaries, in fact!)

What I can say that's new, however, is the "I need more punch" line is inspired by something similar said at an actual party by someone under basically the same circumstances.

Come to think of it, this and the previous comic might be the most "based on a true story" this comic has ever gotten. I guess this means it's taken the record away from Grace's birthday party (wow, I'm linking to a lot of Amanda and Lisa in this commentary, aren't I?).

The Guests In General

The stuff they're doing might be inspired by reality, but none of these party goers are based on any specific real people. They are, however, already developing their own distinct personalities in my mind thanks to the random party stuff they're doing and their expressions while doing them. I need to be careful before this turns into a pilot for a spinoff.

Incidentally, those are Rick and Rhea's arms and such in the foreground of panel three. I wanted to showcase the new arrivals, but I didn't want the hosts to just vanish, either. Panel three is my way of saying "look, look! They're still there! Well, two of them, but Elijah's probably around somewhere!"