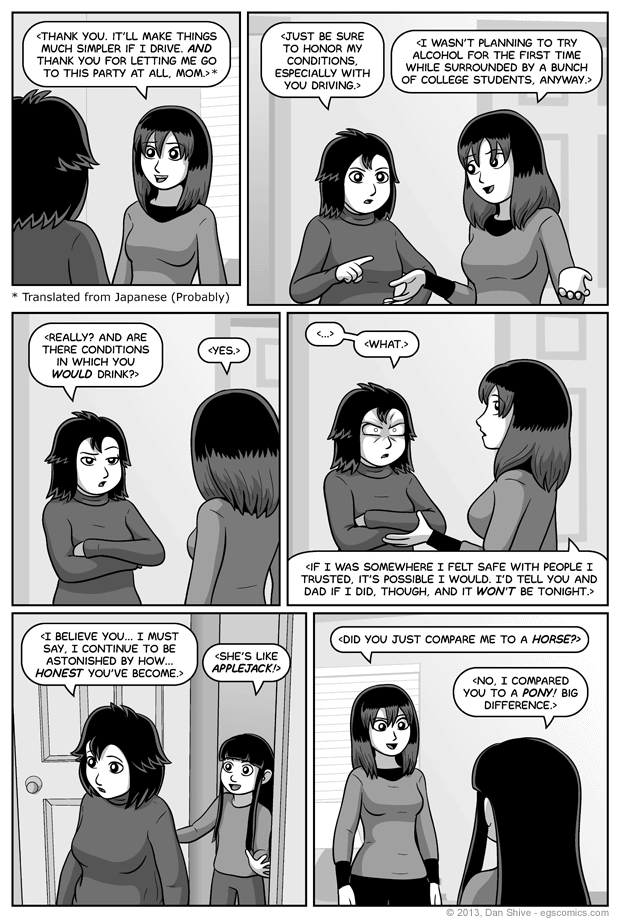 I've probably done the "translated silence" bit before, but that's just how I roll.

And yes, Akiko is reference My Little Pony in this comic. Madness, I know. An eight year old girl who watches My Little Pony? It's unheard of! Specifically, she's referencing Applejack, a character who is supposedly known for her honesty. I could probably put together a list of examples of her not living up to this trait, but I probably have better things to do than to pick on a cartoon pony.

In fairness to Akiko, if talking about those ponies, yeah. There's a huge difference. Their heads don't look like those of horses or real life ponies, their eyes are huge, they can talk, they have no visible hooves, they come in all sorts of colors, they do all sorts of things that should be impossible without hands, some can fly, some can do magic...

Given all the stuff the "little" ponies can do, one could argue that not a whole lot of everyday things would change for Nanase if she were a pony beyond having to figure out how to type without fingers, and even then she'd probably figure something out. Heck, that wouldn't even be an issue if she were a unicorn. Once she got the hang of it, she could probably telekinetically type faster than any of us.