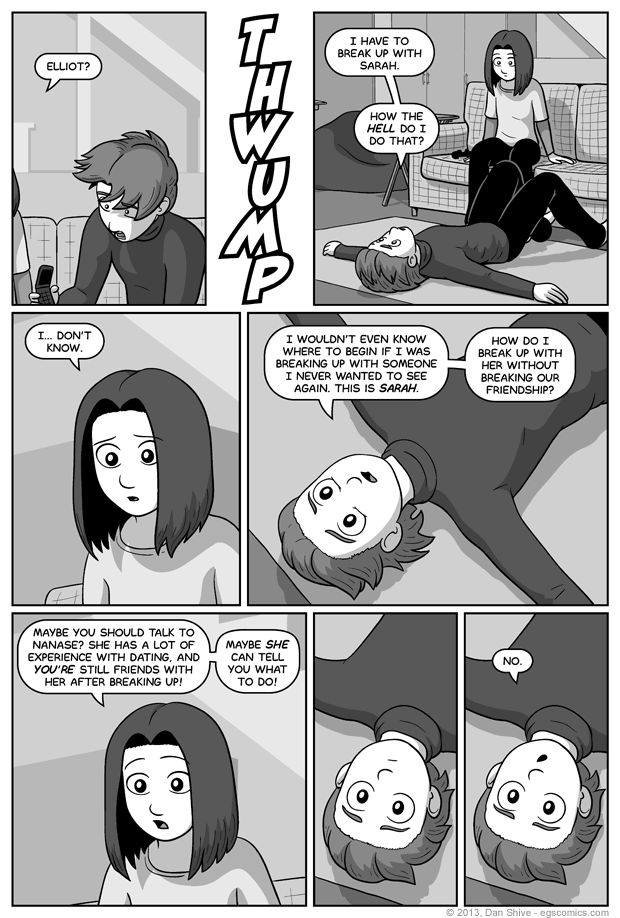 The first panel of this comic isn't an intentional reference to a moment from The Princess Bride, but it may as well be.

I wound up redrawing the third and fourth panel (assuming "thwump" counts as a panel) because the position Elliot originally wound up in would have required him to fall on the floor and then awkwardly reposition himself about ninety degrees to his left. He might not be exactly where he would have landed in the final result, but I like it.

The last panel of this comic is sort of a cliffhanger, I guess, but I didn't write it as one while maniacally twirling my mustache. I just ran out of panels, so we have to wait for clarification.

Still, seeing as it does function as one... WHAT does Elliot mean by "no?" WHY does he object to asking Nanase what to do? WHERE did his phone wind up after he fell? HOW will Elliot break up with Sarah? WHEN will we get to see cake?

FIND OUT! Sometime! In future comics! Except for the phone one! It fell somewhere, but I'm probably not going to bother showing exactly where! Because it's not important to plot or character! It's just a phone! A pretty basic phone, too! He could probably replace it pretty easily! But that's really not important! I just wanted something for the "where" part!