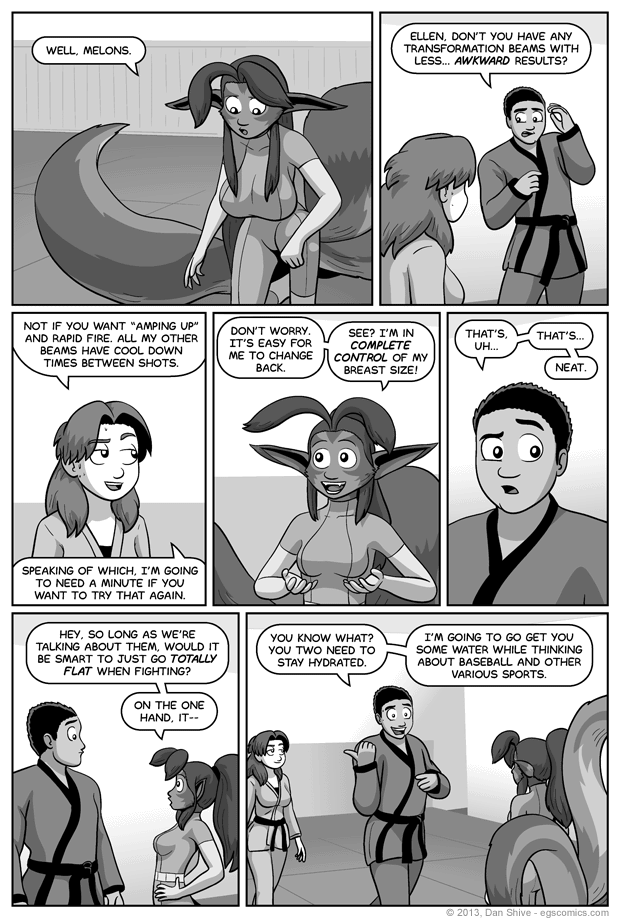 I can't know with 100% certainty as it's been a while since I've been in this exact situation, but I suspect I would respond similarly to Greg if I were in his place in this comic. If not, I'm sure I'd still say something awkward and embarrassing. There's no way I'd make it through such circumstances with my dignity intact.

When contemplating the inclusion of humor with the potential to make Susan unleash hammers, there are at least four questions I ask myself:

1. Do I genuinely think it's funny?
2. Does it make sense in context?
3. Does it go too far in some way?
4. Will older me look back on this update and shake his head with disapproval in the general direction of current me?

If the answer is "yes" to the first two and "no" to the second two, I generally think it's acceptable and should be included.

This is especially true if the answer to "does it make sense in context" is "yes, and it would make even less sense if it didn't happen". I think it's appropriate that the easiest beam for Ellen to fire is the one she got first, and she already fired it a whole bunch of times in a row at the goo.

I also think it's appropriate that her new beams not be things she can just rapid fire at any given opponent. We're talking about ranged abilities. We've gotta nerf them somehow so the inevitable EGS MMORPG will be balanced.

Of course, it would be even more appropriate if her first beam didn't have such an... awkward affect on women, but that's logic established by past me. Don't worry, I'm shaking my head with disapproval in his general direction at this very moment.