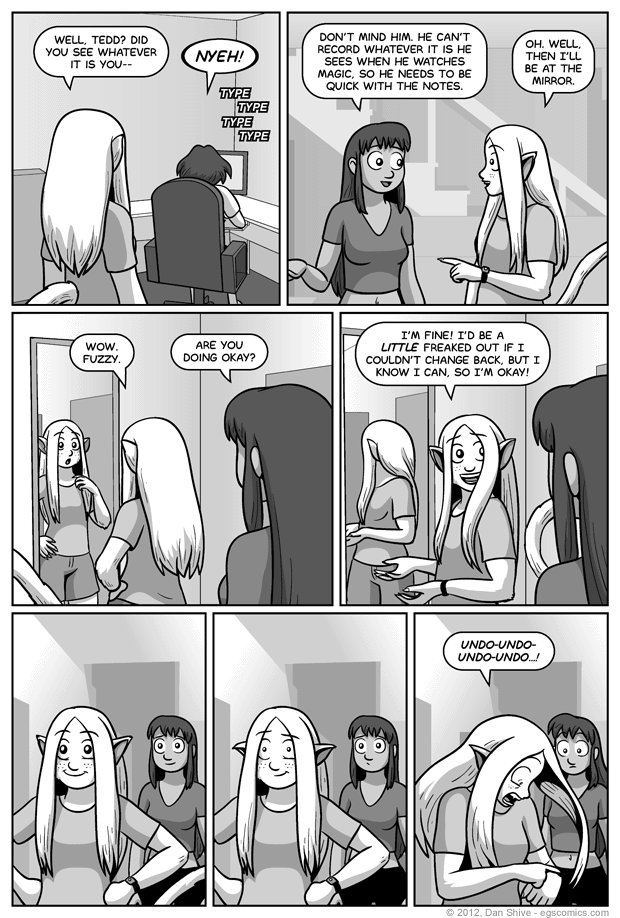 Posted October 26, 2012 at 1:00 am
Reminder: The comic is on a Monday-Wednesday-Friday story comic, Tuesday-Thursday sketchbook entry schedule until further notice.

- Once again, a link to Tedd's observational prowess (or glasses setting, whatever)

A subtle detail of panel six is that Sarah's tail has gone from being elevated and visible on-panel to being completely off-panel. This has to do with cat moods and how you can tell a thing or two about what they're feeling by their tails. I could have emphasized this more by having Grace look down, but I think that would have just made it look like she was looking... Elsewhere.

It took me a while to sort out Grace's dialogue in panel two. What seemed most natural to me was to say something that basically boiled down to "he can't record the magic part of what he sees, so he has to record it while it's fresh in his mind". It's two different definitions of "record", but it just sounded weird, and I kept coming up with wordier and wordier alternatives. It's almost like the English language can be a tad bit confusing at times.

Speaking of dialogue, Sarah originally repeatedly said "change back" in the last panel. For whatever reason, I just like "undo" more. This may have to do with my own fondness of the undo option in computer programs and my wish to have that, along with video game save points, in real life.