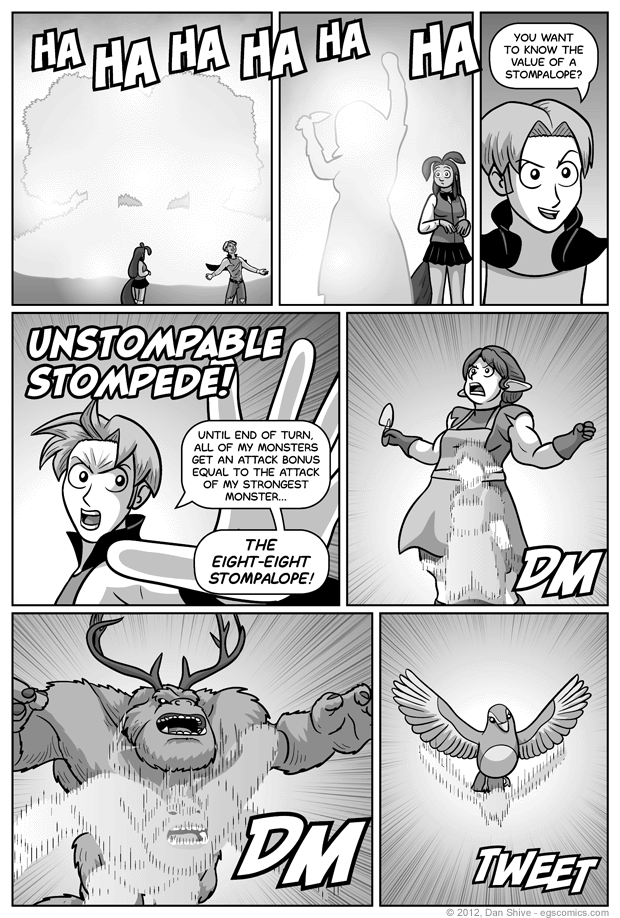 Before anyone accuses this card of being overpowered, I should note that it is inspired by a real Magic: The Gathering card, and, if taking Justin's description literally, the real card is more powerful.

Granted, that's actually all independent of whether it's "overpowered". I'm just pointing out that someone could actually pull off something equivocal to this in the card game that inspired it in the same number of turns (I should know; I've done it).

I forget when I've done it before, but this isn't the first time I've used "dm" as a sound effect. This last time I used it, I believe criticisms of it being weird lead to me changing to to "boom", but I'm sticking to my guns this time.

For one thing, I like sound effects not being actual words, especially if they're just quick little sounds. Pulling vowels, in my mind, has that effect. It's like "doom" or "boom", but it's so fast and booming, there's no time for vowels!

Secondly, this storyline has a number of overt and subtle Yu-Gi-Oh! references, and they "dm" it up, too.

Someone pointed out to me that Justin would have been out of cards prior to drawing a card for this turn regardless of Skreevos based on this being mostly a Magic parody, the starting hand size in Magic being seven, and the number of cards he's played.

I believe they're correct (given that one does not draw on their first turn if they go first), and it was totally a lapse in logic on my part, but I still think it's good that I included that ability on Skreevos. I never established their hand sizes, and Grace's imagination doesn't show them holding any cards. Thanks to Skreevos, Justin being down to the card he just drew is explained without question regardless of those details.

And besides, this is a parody! Maybe he started with eight cards, huh? Ever think of that? Or nine. TEN! Six? Wait, that would create a plot hole. Well, whatever.