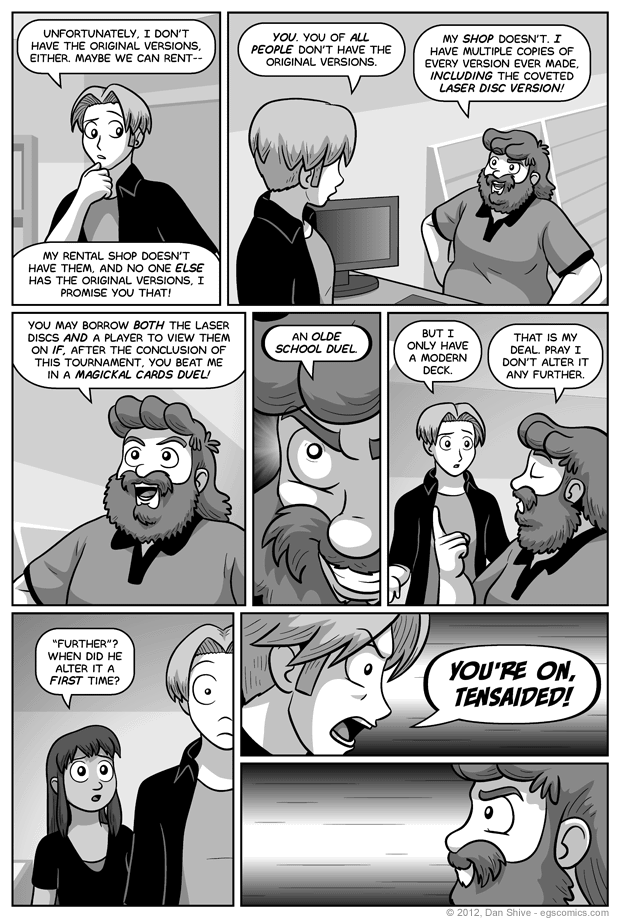 And so it was that the reason for the storyline title Duel Of The Discs was revealed to all, and there was much rejoicing.

What's funny in a "I want to punch something" sort of way is that I was attempting to give all but the "sealed" card tournament formats made up names that effectively described what cards were allowed without using the names of any actual tournament formats. It turns out, however, that they added a "Modern" format to Magic when I wasn't looking. What's more, their modern format allows a bunch of (relatively) old cards.

In my defense, their naming choice baffles me. "Modern" equals "you can use cards from 2003"? I mean, yeah, that's "modern" by the standards of human history, but that's like, centuries ago by card game standards.

The absence of George

One might be wondering where George is in all this, given the Star Wars and the nerdiness and the hey-hey.

George's absence is basically the ultimate evidence that I am at least trying to give this storyline decent pacing. I originally imagined him present, but every point he could have made are better made by Grace and/or Justin, and he didn't really have a purpose in this storyline beyond "they're at the comic shop, it's likely George would be there".

So where is George? I'd like to think he's playing an RPG with people at the local community college cafeteria. Probably something involving werewolves and lots of pizza and snacks and stuff.