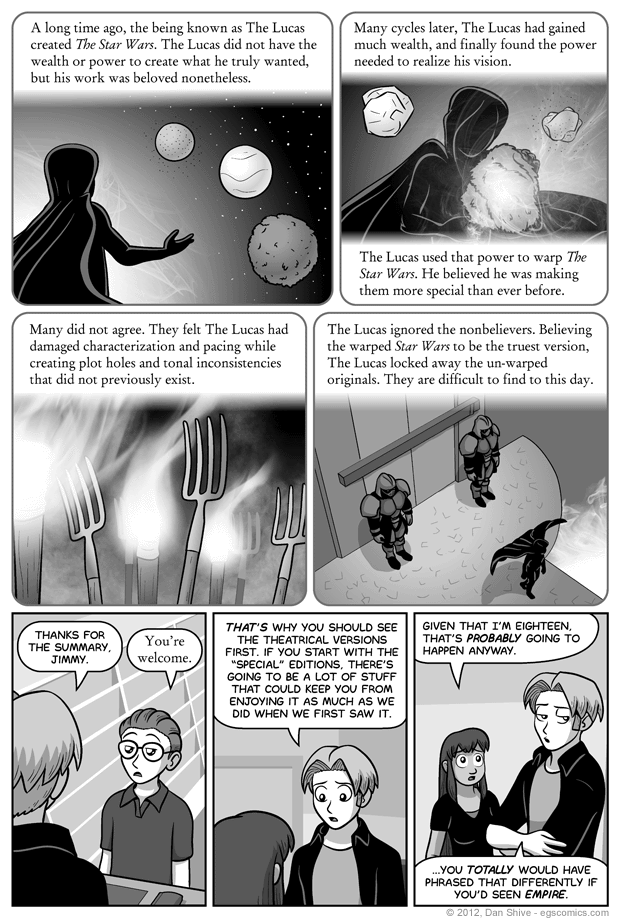 Not really, of course. The imagery in this comic is the end result of the train of thought that left the station with the idea of someone providing an explanation while using phrases like "The Lucas".

Now, I know most of you probably needed no such explanation, but this motivation kinda sorta majorly matters in this storyline, so no. I'm not going to assume everyone knows.

Besides, I want to make it clear that Justin is being specific about watching the series for the first time, and that it's not just a case of "oh no it's different therefore it's bad". Thanks to the magic of insomnia, I once read a comprehensive detailing of all the changes made in each version of Star Wars, and there are genuine grievances if you care about the story and characters.

This order keeps the exciting reveal an exciting reveal for new viewers, and keeps that one moment I mentioned from being 100% confusing (it's still at least 50% confusing). Episode One is evidently entirely optional in this order, being watched either after Empire or after everything else when bored or something.

That said, I've actually been really in the mood to watch all six movies again. I blame this storyline, and I'm especially bitter about it since I don't own Episode II.

Oh, and in case anyone's wondering, Justin is referencing the "too old to begin the training" line.