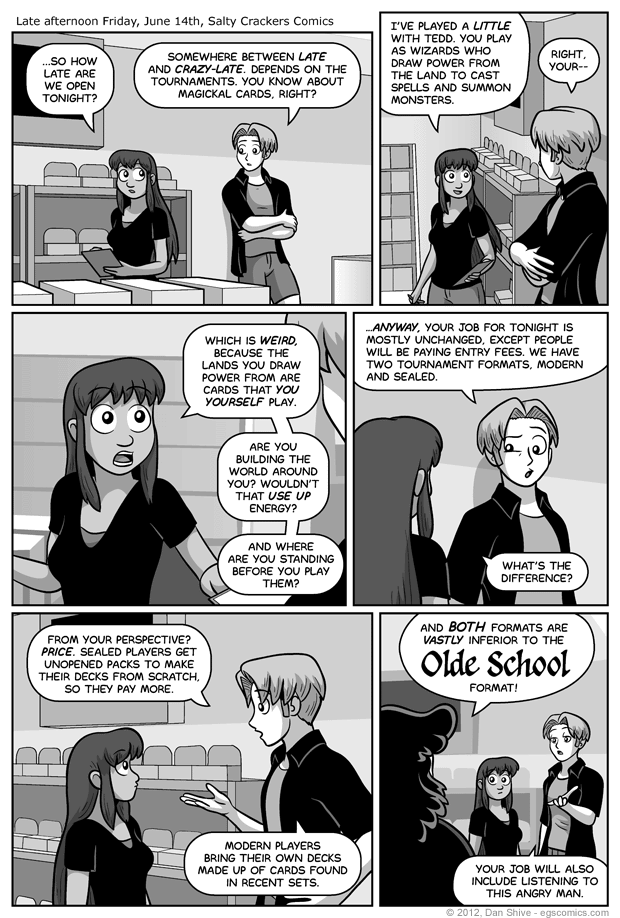 I'm going to have some fun with this storyline. I invite you to join me! Pull up a chair. I brought doughnuts! No, they're not Krispy Kreme, but they're good. I got them from the local supermarket, and... Hey, come back!

I'm not exactly revealing a shocking secret when I say the card game they're playing is a parody of Magic: The Gathering. I have several reasons for going the parody route, one of which being not wanting to anger coastal wizards, but I parody out of love, darn it!

(Except when I don't, but when I parody out of hate, by GOLLY is it obvious).

The Friday night tournaments are inspired by actual official weekly tournaments. It's been a while since I've been free to go, but I've enjoyed going in the past. I wonder how long it's been since--OCTOBER?! Dang. I gotta fix that.

As for Grace's land question, I'm sure there's some sort of lore explanation for what you're "doing" when you play a land card, but I was still in High School when I read the original "we're too cool for storylines" lore behind the game. That part of my brain has since been filled with Simpsons commentaries.

I like to think the lands are all there, but the wizards have to run around planting flags in the locations they want, all while fighting and summoning monsters and stuff. It would explain why you have to wait until you draw and can play the cards. It represents the hard work in getting to there, planting the flag, re-planting the flag after you didn't do it right, getting the zoning permits... It's everything you think of when you think "epic wizard fight".