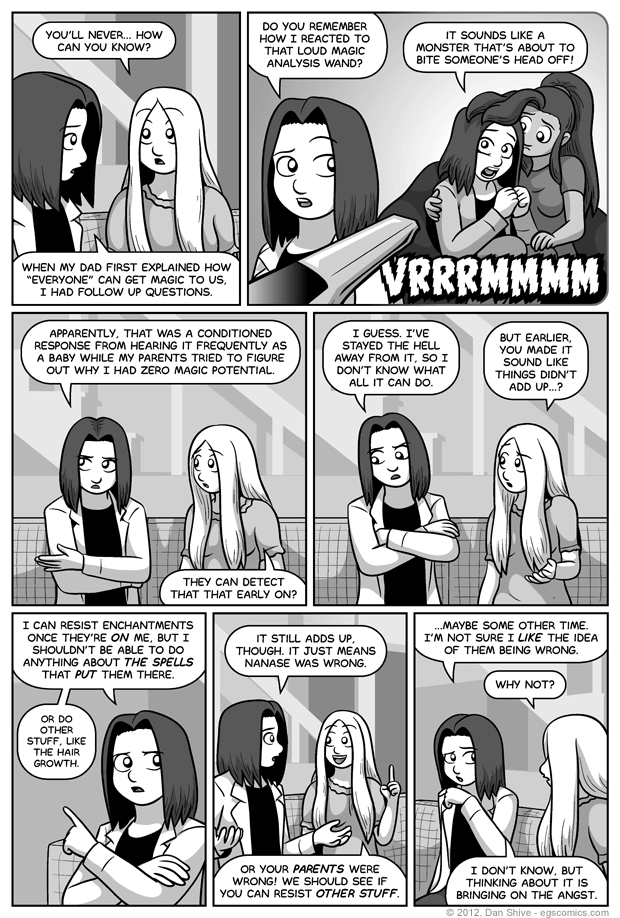 This isn't retroactive continuity in action. The whole issue of Tedd not having the potential to get spells of his own was originally going to be brought up way back in 2008 as part of Sister II, and Tedd's somewhat more extreme reaction to the wand was intentional foreshadowing of his prior forgotten experience with it.

As one may recall, however, Sister II had way too many plot threads already, and this would have distracted from everything. I decided to wait for a more appropriate moment, and nearly four years later, here we are. Yay.

I considered devoting more panel space to elaborating on the distinction, but I think Tedd gets the point across fairly well. At least, I hope he does. I wrote it, so I'm sort of biased.

In any case, let's use the transformation gun for an example. Let's say Tedd randomly decides to zap Elliot with a catgirl form. The beam from the gun would be like a spell. If Elliot can dodge that spell or resist its effects upon impact with his spell resistance, he won't turn into a catgirl.

If he can't avoid or resist the spell, however, the spell places the catgirl transformation enchantment upon him, at which point the strength of the enchantment and his enchantment resistance will determine how long it lasts.

I personally like this sort of distinction, as it can make for varied types of magic vulnerability all on its own. For example, someone with no spell resistance, but high enchantment resistance, would be easy to enchant, but the enchantments would be relatively short-lived. Someone with those extremes reversed would be very difficult to enchant, but once enchanted, would remain so for a much longer time.

Of course, your average person in the EGS universe has practically none of either form of resistance. If someone is good at resisting spells and/or enchantments, they're either a natural talent or have done things to build those resistances.