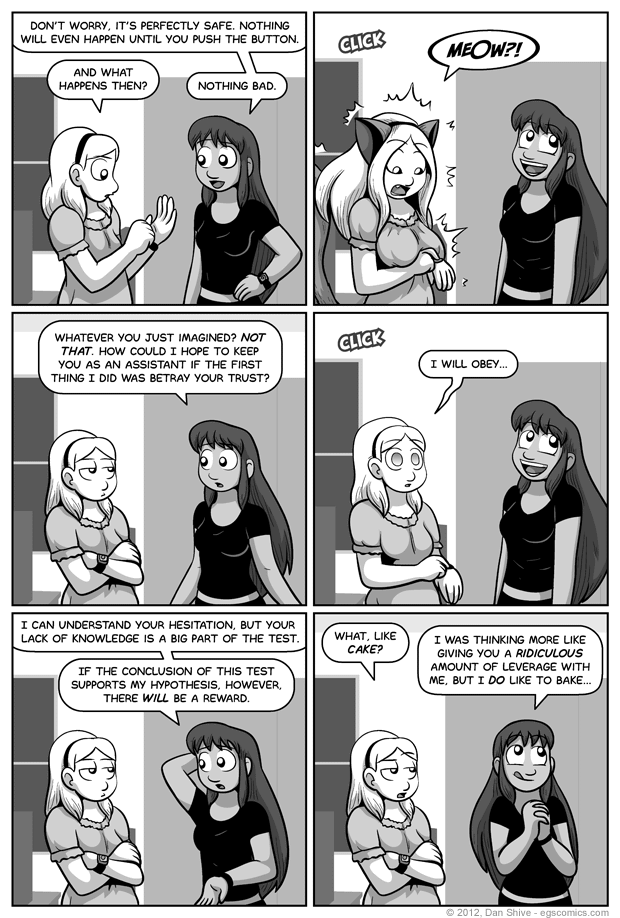 Posted April 13, 2012 at 1:00 am
I have not abandoned the customary grey rounded panel borders for brief fantasy and flashback moments. Given that the intent of those panel borders is to make it immediately obvious that what is being seen is not literally happening or was in the past, however, I felt they were a poor choice for both this comic and the start of the storyline.

Then again, the start of this storyline was a dream, wasn't it? Should that count as a fantasy sequence? Now that I think of it, no, it shouldn't. It's not really the same situation, even if it was just in someone's mind. Never mind, then. The deviation from the norm doesn't apply to the dream. I deem the panel borders in that sequence up to code.

This comic was delayed by a day, and obviously not because of the massive variety of artwork the comic called for.

Mostly, it was due to how tired I was on Wednesday. I was behind on sleep, and tired to the point of nearly feeling ill. From a drawing standpoint, this comic was fairly simple, and it was still a tall order given how I was feeling.

Another reason, however, was that while this comic fairly closely reflects what I had originally imagined this moment being, I originally had trouble translating it to comic form for some reason. I wound up writing a similar but different script that lacked the fantasy panels, and several scripts for the comics to follow that built off of it.

I really wanted those fantasy panels, however, and when I did figure out a script that included them that also worked, I decided to do a rewrite that restored the script to how I had imagined it in the first place. It feels a bit wrong to call that a rewrite, as this is more true to what I had wanted originally, but I suppose that's what it was.

Of course, now I have to edit the ever-loving text out of the upcoming comic scripts, but hey, at least I'm not starting from scratch with them.