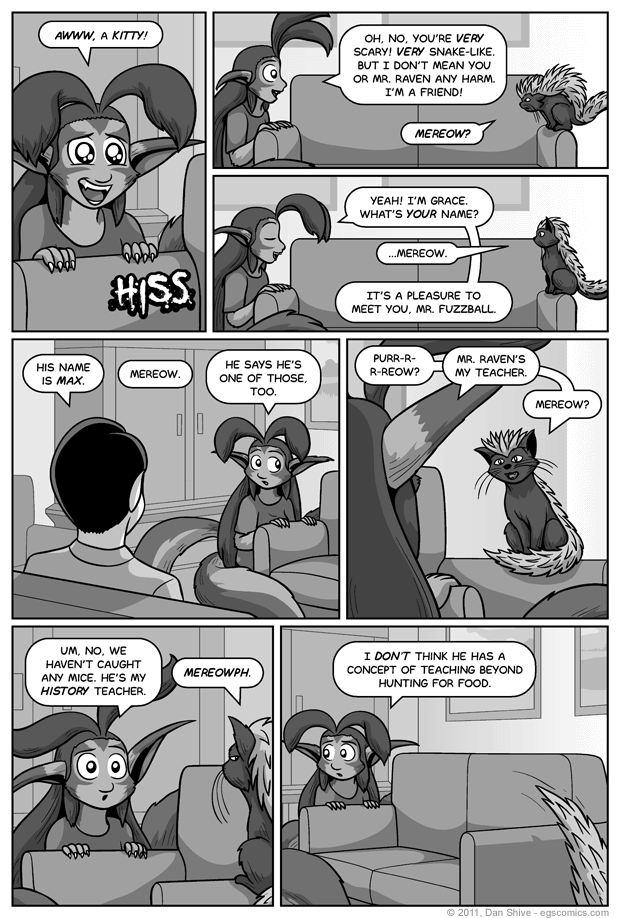 Posted December 23, 2011 at 1:00 am
- Mandatory savage linkage to the earlier Jeremy conversation

Jeremy, as I'm sure I've mentioned SOMEWHERE online before, was named after an old character of mine I drew in junior high school who was also some sort of cat with spines on its back. The "original" Jeremy had dark fur as opposed to the EGS Jeremy's lighter fur. Meanwhile, I also had a character named Max, who had fur closer to EGS Jeremy's and bat wings instead of spines.

Long story short, I decided to name this hedgehog-ish feline Max because of weird stuff I drew in high school and some loose sense of irony on account of the flip-flopped lightness/darkness of fur.

The Mind of a Feline

Large portions of my everyday life are spent attempting to figure out just what the hell the rest of the world is thinking, which isn't limited to people. When a feline friend of mine is making a fuss, I try to get inside their head. They usually just roll around as if to say "man, you can't get in my head", but I still try, darn it.

One thing I often wonder is if your average cat actually understands what is meant by their name. I'm sure the cats I've hanged out with at least know there's some significance to the words we use for their names, but do they understand the very concept of what a name is? If a cat is named "Fluffy", do they get that's their name? Do they think they ARE a "Fluffy"? Just what's going on in their kitty noodles?

Then there's the fact that I think my old cat believed I could control the weather. She was an indoor cat, only allowed outside briefly and if supervised. If it was raining when she wanted to go outside, I would open the door in order to communicate "dude, it's raining." She would then look at me as though to say "well, turn it off, then."

That might sound weird, but seriously, how weird must it be from an animal's perspective how much control we have over light and water in our own homes? We flip a switch and there's light where none was before. We turn something and water rushes in. It really makes me wonder what they think we're capable of.