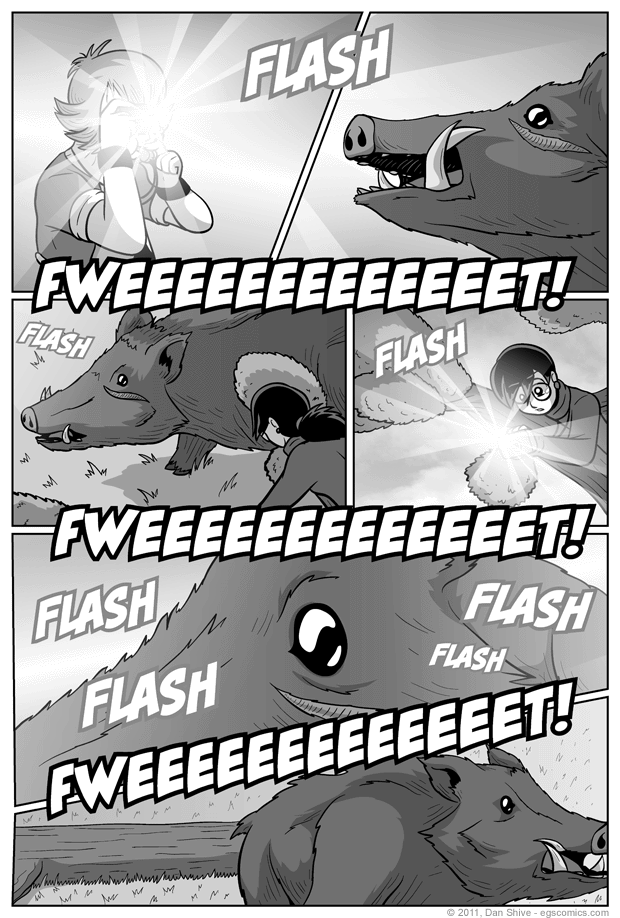 Posted November 1, 2011 at 1:00 am
You know what the tragic thing is? If this were a Dragon Quest video game, neither of them would get any experience points for scaring off the boar. What, if you don't kill anything, it doesn't count as an experience? A bit twisted there, Dragon Quest.

Many people asked why Catalina has fangs after seeing the previous comic, but it's worth noting that she's always had fangs. It's also worth noting that she simply has unusually pronounced canines... OR DOES SHE? Probably. BUT POSSIBLY NOT. Not likely not, though. Or... wait, hang on. I've lost track of my negatives. Um...

Okay, unless the comic's story later reveals otherwise, it's probably safe to assume that they're just very pronounced canines.

I have read anecdotal evidence that it's possible to scare off a boar with just a camera flash. I would consider testing how camera shy the boar is to be a last resort while treed or something, but you'd better believe any camera I buy now is going to have a manual flash setting. Some cameras have automatic flash only, meaning it might not flash when you need it, or even no flash at all due to fancy light adjustment software. Don't you know there are lives at stake, you stupid cameras?!

Without initially realizing why it was poorly phrased, the direction I wrote in my script for panel four of this comic was "Rhoda joins in on the flashing". It's a good thing I'm the only one who has to work from my scripts, or who knows what we might've ended up with.