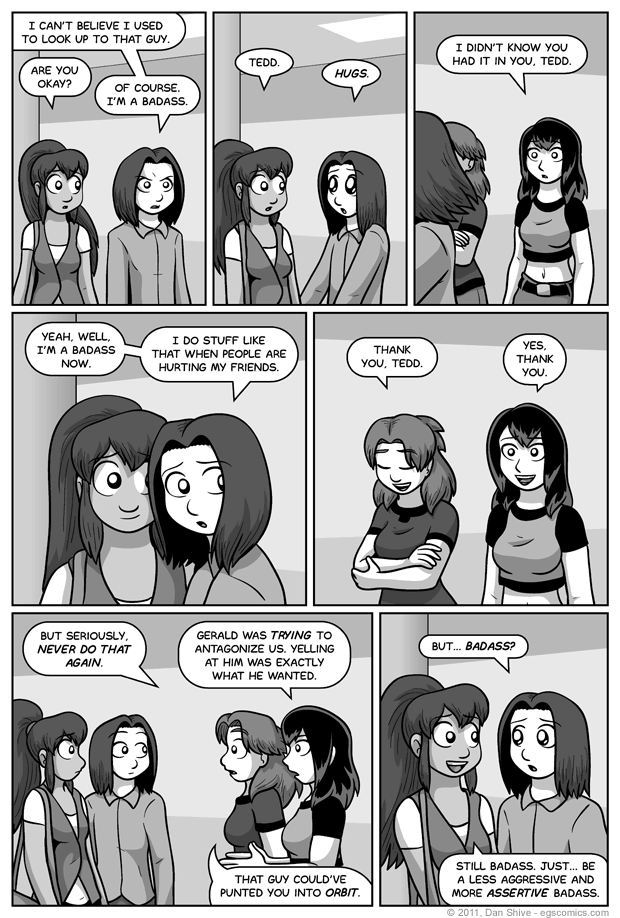 I MIGHT have taken Tedd's puppy-dog eyes a bit too far in panel two. Not because they don't fit the moment, but because readers of this comic might attempt to hug the screen. Please do not do this. Even if Tedd could feel your hug through the interwebs, there is the chance you could damage your monitor or drop your tablet phone dealie or whatever.

Never do that again

There are several lessons one could take away from what they're telling Tedd here, such as "don't feed the troll" and "dude that guy could punt you into orbit", and... wait, I just got a tweet. A tweet as I write the commentary. Is that like being on a call-in show? Have I turned into Larry King? Did people actually call Larry King, or was that just in parodies?

Well, whatever. The tweet was asking whether "punt you into orbit" was a reference to video game called Persona 4. I've been asked what my opinion of the Persona game series was before, so this is as good a time as any to answer: I've never played them. The extent of my knowledge is that they are video games and apparently have an anime style to them.

So, no, it's not a DELIBERATE reference to anything. I just think punting things is funny.

Anyway, when it comes to real life, I have to agree with Ellen, Nanase and Grace in this situation. Defending yourself from a bully when absolutely necessary isn't something to shy away from (what with it being absolutely necessary and all), but generally speaking, it's probably best to ignore jerks and avoid escalating the situation in any sort of aggressive manner when possible.