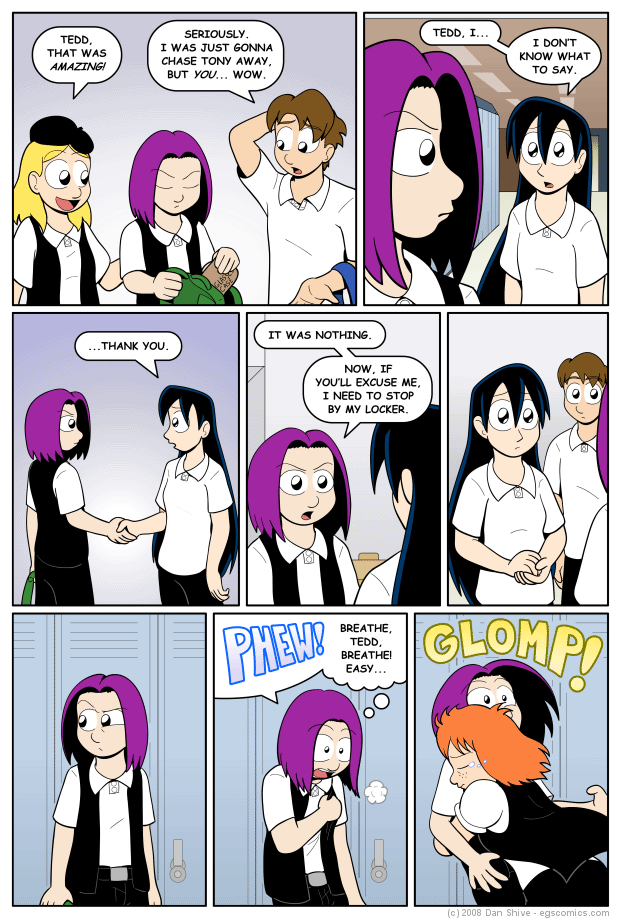 Posted June 18, 2008 at 1:00 am
There are those who will say that showing that Tedd, deep down, was not nearly as calm and collected as he appeared is stepping on his moment of awesomeness. I respectfully disagree. Yes, Tedd was struggling to keep his composure and was scared, but he did it anyway. That's real courage.

In addition, even though the moment has passed, he's keeping his "security blanket" glasses off. I think it's safe to say he's less scared of his classmates now, but that doesn't mean standing up to them like that wasn't a scary moment for him.

Anyway, that's pretty much why Tedd constantly looked angry during this. Yes, he was angry, but he was so focused on not freaking out that he had to maintain that sort of face up until the moment he was ready to lose his composure. If not for that, he likely would have smiled once people started apologizing to Susan.

Incidentally, not counting the cover, this is the 25th comic of the Sister, Part II story arc. By EGS standards, I believe we are moving very quickly through this arc, and that makes me happy. We're getting to plot points right now that I once figured would take me another year to get to, but here we are, speeding along. Some may prefer it go faster, but as far as I'm concerned, we're zooming along at 80 MPH down the story arc highway.