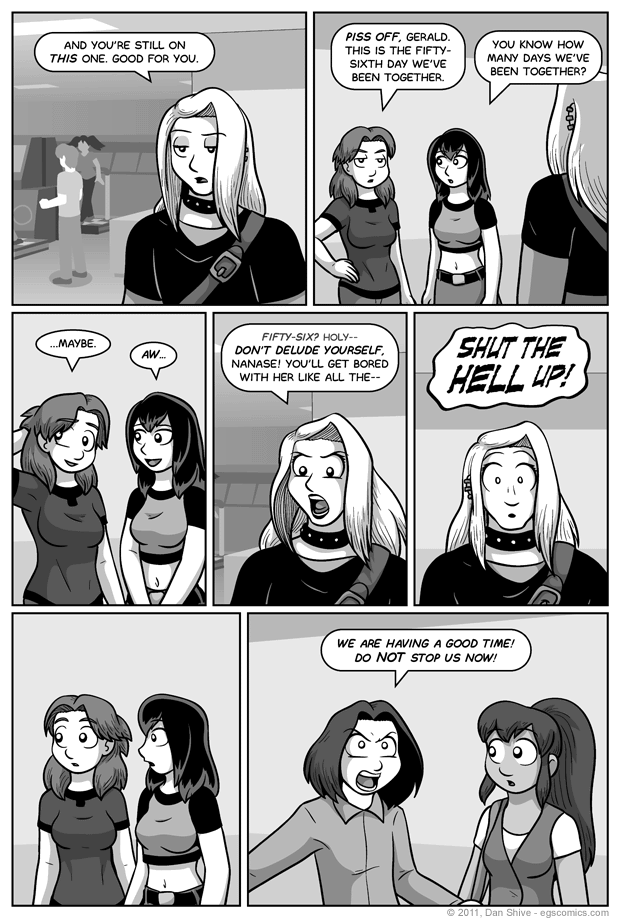 Look out, Gerald! Tedd has the blood of kings inside of him and he will rock you because he is the champion!

It's possible I've been listening to Queen recently.

Once again, bless the existence of the mostly fan-made timeline. Of course, 56 days only sounds like a lot until you make note of the fact that it's less than two months, but that's still the majority of Ellen's literal existence.

It might be possible that I write a strange comic.

There is a perfectly reasonable explanation for this. When Grace and Nanase went to check the wait times, you see, Grace briefly placed her purse upon the counter. When she picked it up again, five crocodile ninjas appeared and demanded all of the bowling alley's shoe spray. Realizing that stinky feet were a very possible reality, Grace used her purse as an improvised weapon to vanquish the crocodile ninjas, but they were unfortunately only a precursor to the ninja boss, a giant ninja hippo! Fortunately, the hippo was too giant to even get into the bowling alley, so she was vanquished by default and sheepishly left, taking her crocodile ninja minions with her.

Wishing to keep the purse relatively loose in case the ninjas came back, Grace placed her purse on her right shoulder, thereby making it so it would quick and easy for her to slip it off for use as a weapon once more.

That, or I forgot to draw it. Whatever.