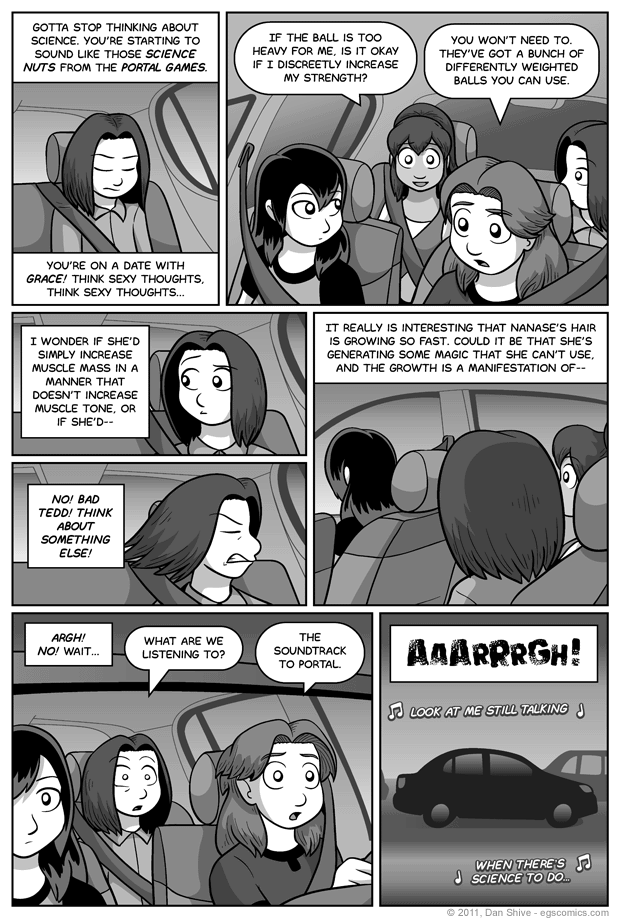 Posted August 25, 2011 at 1:00 am
- Tedd silently freaking out about something is apparently dating tradition

Nanase's hair length was originally something of an art mistake, but as is tradition when making mistakes with EGS, I've decided to roll with it. Not only can I no longer imagine this story without it, but Tedd's SCIENCE! interest opens up more writing options for me all over the dang place. Seriously, the lemonade that's resulting from that goof up must have all sorts of extra sugar in it.

Don't worry, Tedd. Based on the lyrics shown in the last panel, that song is almost over. The song in question, by the way, is Still Alive by Jonathan Coulton, and it's worth noting that Tedd's protest is VERY situational. I am quite fond of that song and the game it is from, and Portal 2 was one of the best interactive story and puzzle experiences I've ever had.

(In other words, please don't hurt me, Valve, benevolent creators of Portal and other fine products)

While I'm obviously referencing Portal in this comic, there's also a less obvious reference to The Simpsons episode called The Last Temptation of Homer, "Think sexy thoughts" is basically the opposite of what Homer thinks at one point during the episode.