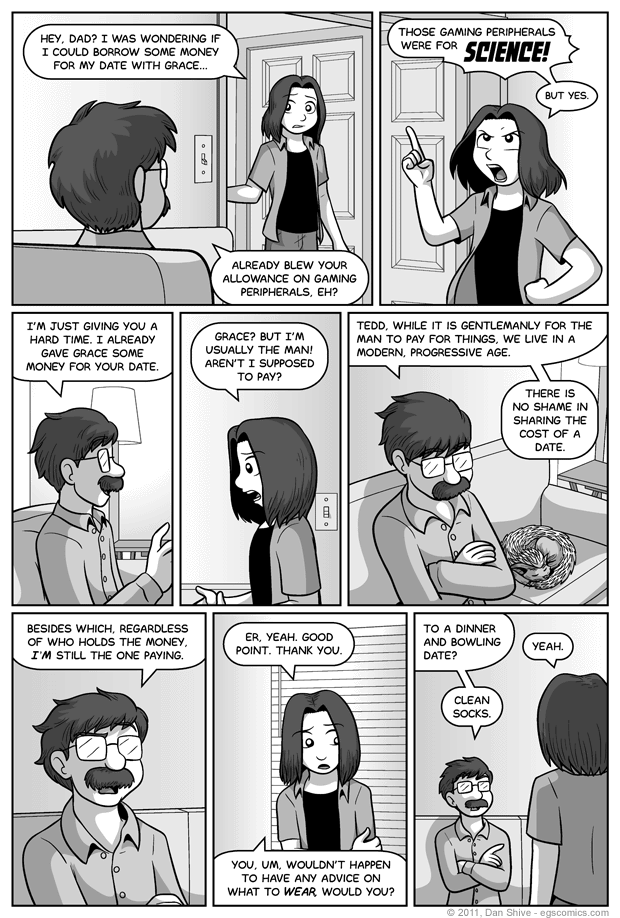 OMG IT'S JEREMY! I'm not sure when we last saw Jeremy. Was he even in Bringing Silly Back? It's hard to remember, as he's usually just a furry background prop. Look at him. All furry and in the background.

I agree with Mr. Verres, but at the same time, I understand some men wanting to pay for things and women wanting men to at least offer to pay. There's a sort of instinctual side to it regardless of it making less sense in modern society. I want to say "that's silly" to the whole thing, but feelings matter, and there is a certain amount of silly masculine pride at stake in these things.

You know, I have a tendency to point out how illogical certain behavior is, but if you place a value on the emotions involved, a certain logic forms, so it's a bit of a misnomer. Can I still claim behavior that is only logical from an emotional perspective is irrational? Or does the emotional value dealie ruin that word for everyone too?

BAH! I will find some manner in which to express my feelings regarding behavior that is based only on feelings and not the non-emotional logic that surrounds the given situations!

Was that the least bit coherent?

ANYWAY! Um... actually, I think that's all I have to say about this comic.