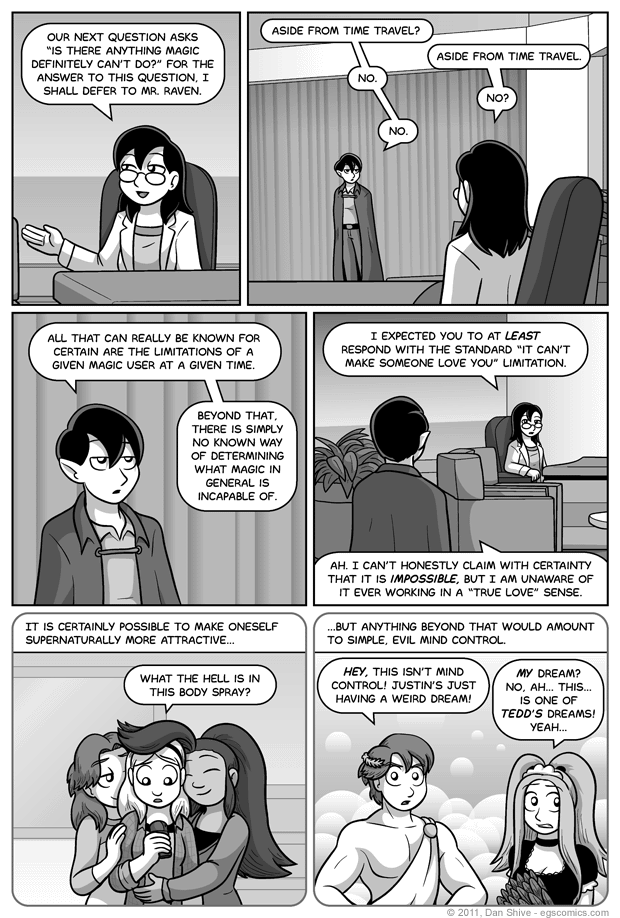 Justin's comment in the last panel of this comic has made me realize that we have yet to see any manner of sexy dreams from Tedd. That's probably for the best, but still. Idea bucket.

How Little we know

This is one of the important points these days in EGS, which is simply that they don't know what isn't possible with magic, and they don't know how to figure it out. I really, really want to say more about it, but it's occurred to me that such elaboration will unfold naturally through the course of the story and I probably should save it for then, so I'm going to move on before I trip over my own line of thought.

A common rule in stories with magic is that it's not possible to make people fall in love. Not TRUE love, anyway, and I guess if it's the result of magic, putting the word "true" in there wouldn't really make sense in any event.

Nonetheless, assuming all those scientist guys over there in the corner coffee hut are correct and love is the result of scientific mumbo-jumbo, then I don't see why magic couldn't accomplish such a thing. I can think of all sorts of problems that would result if the people involved weren't genuinely compatible, but my point is simply that the whole "wuv" feeling should theoretically be possible to replicate, at least temporarily.

That whole idea, however, is fairly creepy, so I can't help but think the reason it's a rule is often just because of that. Well, that and plot convenience.

While we're on the subject, does anybody else think Cupid is a jerk? He just flies around and shoots arrows at people to make them fall in love. I don't give him credit for the couples that last, oh no. Whenever I see two people who just don't work as a couple together, I blame that little weirdo.