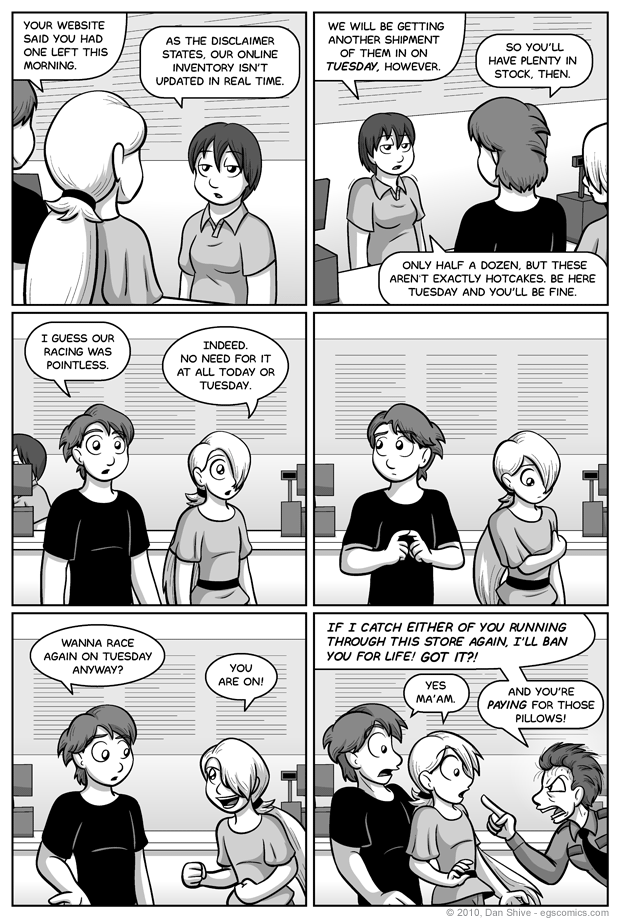 Posted March 26, 2010 at 1:00 am
See? Who says there aren't serious consequences in my comic? They got a stern talking down to and have to buy pillows. DRAMA.

This comic proved very difficult for me to draw in spite of its relative simplicity by simple virtue of me not being in the mood when drawing it. Nothing was really wrong, but I was tired and cranky. There are a lot of things I can do where a bad mood won't affect the difficulty of all that much, but drawing is not one of those things. Staying positive dramatically improves my drawing skill, which I suppose makes me anti-emo artistically.

With this is mind, I often have amusing music and the like on while working even if it can sometimes be distracting. If I'm in a foul mood, the distraction of goofy music that cheers me up is less detrimental to my progress than staying in a funk. It's ultimately better to bust out the sunshine, lollipops and rainbows.

Speaking of which, I just realized that in spite of referencing it at least once a week thanks to The Simpsons warping my fragile little mind as a child, I don't have this song. Seriously? I have the Rocky Horror Picture Show soundtrack, but not this? To Amazon!

Take pity on anyone within earshot of my computer's speakers for the next few hours. This sucker's going on repeat.