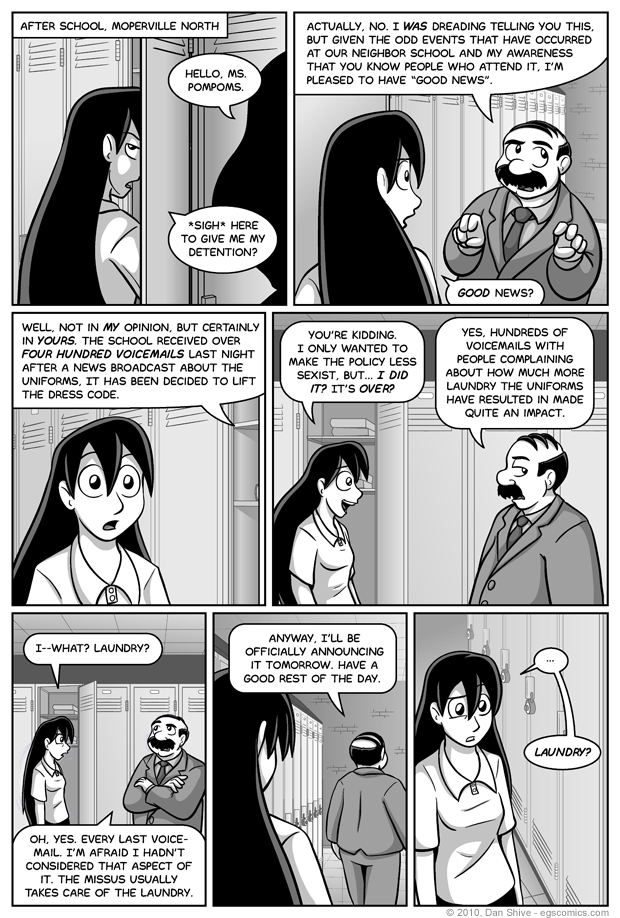 Laundry - Yes, this was foreshadowed.

This is a fairly abrupt end to the uniform story thread, and I've been planning to end it this way for a while. There have been several variations planned over the past few years, but every version has been a resolution where it's an imperfect victory. Its side effects will be long reaching, such as Catalina, Susan's experiences, Tedd's confidence boost, etc.
The reason this resolution isn't being drawn out further is within the first paragraph: this story thread is years long. I think it could've been a good storyline, but that's the thing: it wasn't a storyline. It was an ongoing B-story when it should've been its own storyline with a beginning, middle and end with no interruptions.
At this point, the strip needs to move on. In the big scheme of things, this ongoing B-story will have a permanent impact on future storylines and I believe good has come from it, but it is not the story I had hoped for as a result of trying to do too much at once. This whole thing is among the major reasons upcoming storylines will be shorter and more standalone.
The laundry solution was planned in advance for a while now and was inspired by my own impressions regarding laundry (namely that it is cruel and never ending). And for anyone about to berate Susan for not being satisfied with this, have you ever had a cause you cared intensely about that most people would simply ignore? The feeling that nobody cares about something that matters to you is not a good one.
This comic's production was simultaneously simplified and complicated by my creating the scene with the lockers in a free 3d program known as SketchUp, a program I discovered completely by accident while searching for tutorials on drawing cityscapes. A huge production hiccup I run into is simply scene layouts, and having that sort of programs as a reusable dynamic reference makes a huge difference.
Granted, it's not as simple as exporting images into Illustrator and being done, but with things as complicated to draw in perspective as rows of lockers, it makes a huge difference. Learning the program delayed initial production by about a day, but it also sped up the rest of production and will make any future scene in this area of either school (they have near identical layouts) much, MUCH easier. I intend to make rudimentary models of pretty much every recurring location. I particularly look forward to Tedd's basement; I BASICALLY only know what's in one corner and bust out the gradients for everything else. I'd like it to be a bit more fleshed out than that ^^;