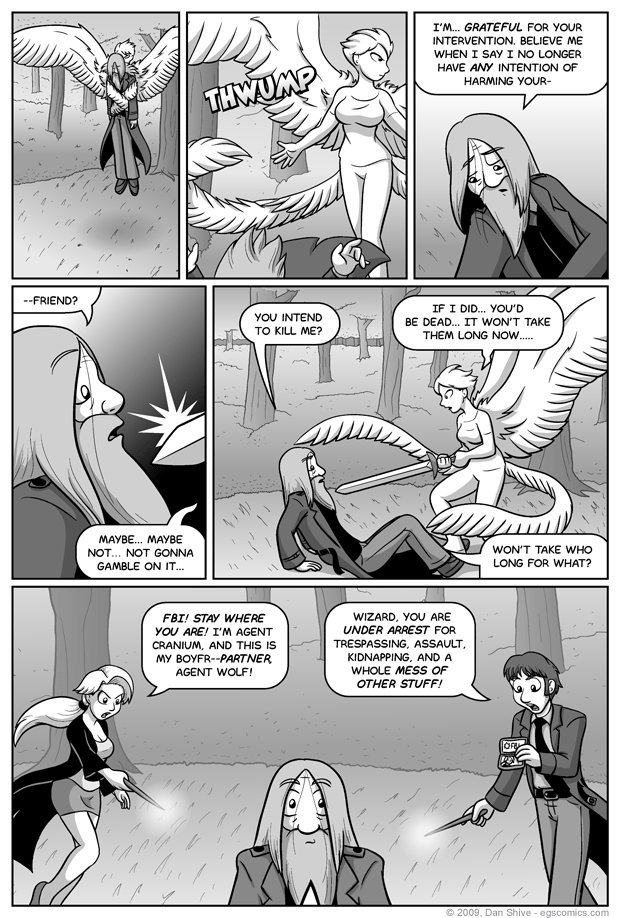 For those not familiar with the abbreviation: BFF = Best Friends Forever. Abe may have sworn to not harm Ellen, but Nanase is far from being his friend.

I love panel two. Dramatic moment followed by "thwump"; it's the circle of life.

How exactly Nanase and Abe got back to earth and how the FBI agents arrived went through several rewrites, though what happens next has remained constant. It's weird how tricky transitions can be.

I believe this is the first canon confirmation that Wolf and Cranium are partners both on and off of crime scenes. This was originally intended to poke fun at the "will they, won't they" aspect of The X-Files.These days, however, I feel like it makes fun of a lot of shows, in particular Bones (which, incidentally, is one of my favorite shows in the history of ever. Yay Booth!).

Point is, there is no "will they, won't they" issue with Wolf and Cranium. They have, they will again, and they utterly fail at hiding it. Point of evidence, that little hard-to-make-out photo in Wolf's wallet below his ID? Photo of Cranium.