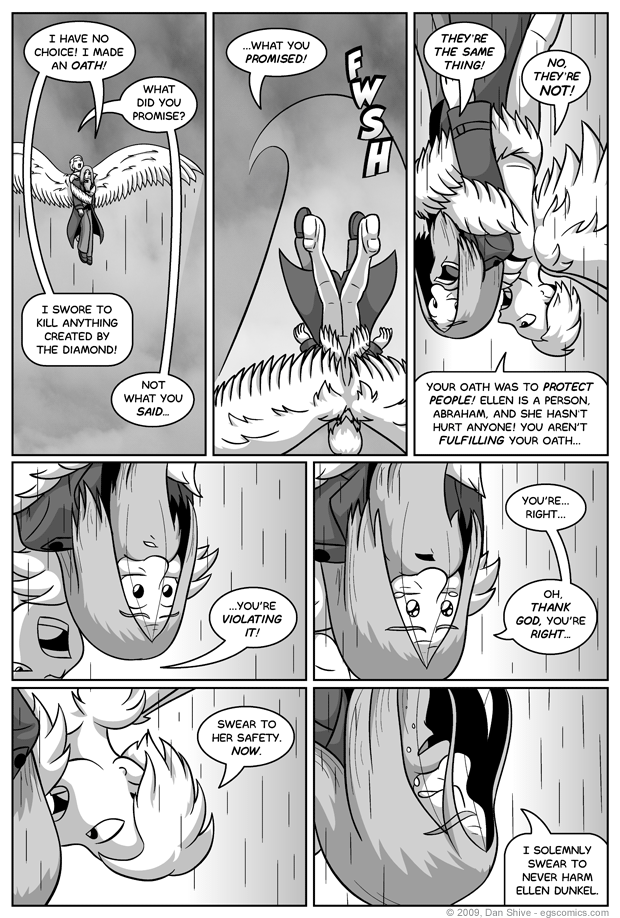 The gambling mentioned in the title works in a couple ways, one of which being in reference to the fact that Nanase doesn't really know what Abraham's oath was. She has a general idea of what it was due to her eavesdropping earlier, but it's more of a deduction on her part than a certainty that Abe's goal was genuinely to protect people.

Some may have preferred Nanase beat the snot out of Abe, and I don't begrudge them for that (we all like what we like, after all), but this is kind of the whole point of this part of the story. There is a difference between how something is stated and what the intent behind it is, and it's important to remember the context of what's being said.

Abe might have sworn to kill everything the diamond created, but he did this in an effort to atone for his own sins and protect people. Out of context, his oath clearly states that he must kill Ellen. In context, however, Ellen is clearly an exception, and killing her would be in violation of everything he's been fighting for.

Nanase putting Abe in a hold and talking him down reminds me of what I was taught in Hapkido. While we did learn some offensive techniques, most of what we learned were defensive counters. The most common defense was to block, grab, and either throw or hold the opponent in a way meant to end the fight without either combatant getting hurt. I can easily picture a real life version of this with someone being reasoned with after being put in a hold.

This page was an odd experience to draw, ink and shade. I do the "sketching" in Photoshop, and the version I have allows me to rotate the canvas while working without modifying the image. This made it easy to sketch the upside-down characters, but it also effectively mirrored the navigation window. I felt like I was in a video game and had gotten a status ailment that reversed the directions on the controller.

The inking, which I do in Illustrator these days, felt disorienting. It's a little weird, since I was just going over drawings I had already done, but it still seemed strange.

The shadow work turned out to be a lot of fun. I enjoy changing the direction the light is coming from, and in this case I think it saves the page. I'm okay with it being a little weird visually given that they're upside-down for most of the page, but I didn't want it to completely overshadow the moment. I actually didn't think this page was going to work visually prior to adding the shadows. I feel they help make it clear that it's the characters, and not the panels, that are upside-down.