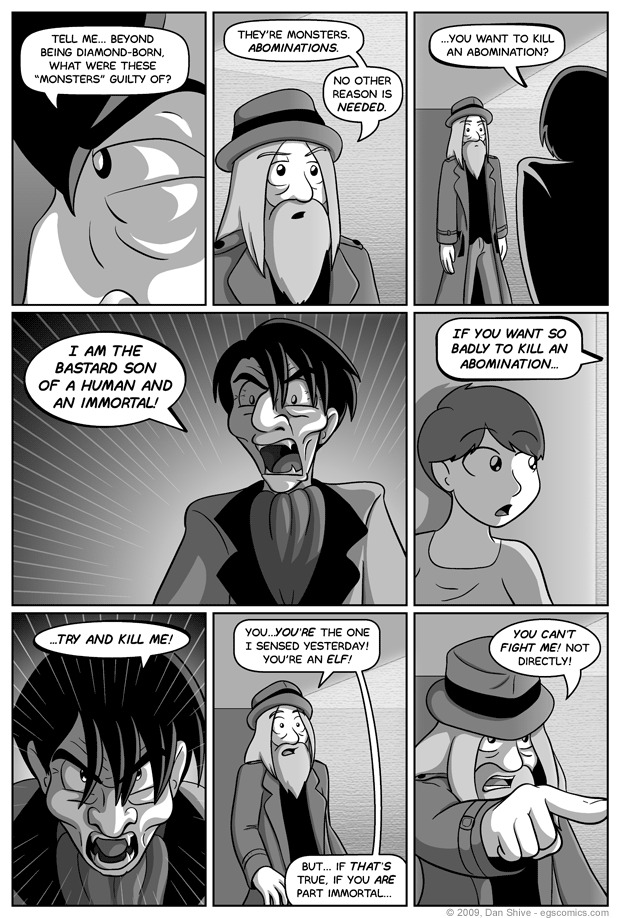 TITLE: ...And a Nerve Stabbed

Based on reactions to the previous comics, I succeeded in making it appear to most people that the "shocking reveal" about Raven was simply that he was a wizard. There is much more, however, to this history teacher...

The additional shading on Raven in Panels four and six remind me of Melonpool, one of my favorite comics. The reason for this is that there's a running gag in Melonpool involving shading. When Steve Troop, the author, does elaborate shading, he has a tendency to include the comment "note the painstakingly inked dramatic lighting effects!" It adds a touch of silliness that I truly enjoy.

As much as I love this page (I try to be humble, but I really am fond of this one), I don't like the note it ends on because it presents not only a question readers will want an answer to immediately, it's a question I'd like to ANSWER immediately. I can't even hint one way or the other because it is, once boiled done to its most important point, a yes or no answer.

Of course, this part of the commentary will seem silly once the next page is up, as the answer will be but a click away. At the time of it being posted, however, I can only hope people don't get into heated discussions about the what the answer will be and the potential repercussions thereof given that it WILL be resolved with the next update ^^;