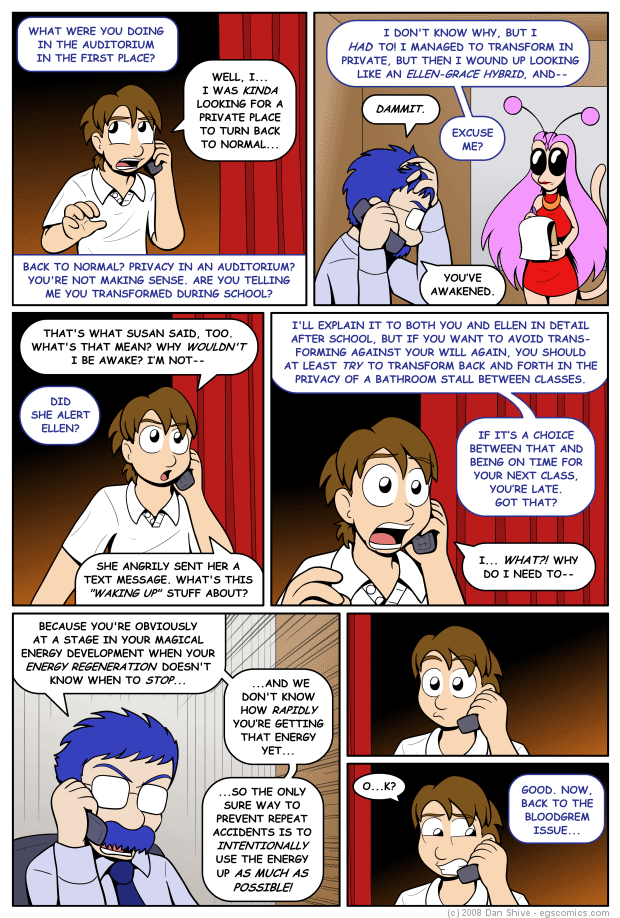 Posted August 29, 2008 at 1:00 am
The ending of this page is intentionally very similar to part of an [[2008-08-19|earlier page]] where Susan snapped at Elliot. Mr. Verres is a bit more reserved than Susan, however, and is more annoyed with himself for not seeing this coming than he is at poor Elliot. I say "poor Elliot" because he's confused, possibly a little scared, and just wants some clear answers.

Much like many of the readers at this point. We already have a bunch of answers, actually; they just have yet to be neatly summarized within the comic itself. Current speculation by characters within the comic suggests that Elliot and Ellen awakened and become magic users after Elliot touched the diamond, but nobody realized it and assumed they simply got limited new powers. They've reached a point where they're being forced to use their magic and Elliot did something with magic that he wouldn't have been able to if he hadn't awakened but is not a reflection of who he is, which is now making it clear to others who know about this stuff that it happened. There's some other stuff, too, but that's pretty much what we have regarding Elliot transforming so far.

Which is basically how I'm going about this. The information is gradually given as other things happen and the story progresses with a quick, neat summary afterwords to satisfy anyone who has had trouble following it (and to provide an easy place to link to instead of a maze of links to sort out ze puzzle). I'm doing it this way in part because all this information needs to get out anyway, but I don't want to have a single scene of nothing but exposition. That gets too wordy, uninteresting, and I figure there's a good chance that important details would be forgotten beneath a wave of textbook style wordiness. In addition, this information will matter well beyond the current arc, so I'm hoping to couple the information in ways that make them easy to remember so only minor reminders are needed later on.

I sometimes wonder if writer's have actual ends to various sentences that get cut off. For example, this comic when Elliot says "I'm not--." In this case, Elliot was going to point out that he's not asleep, but what if it wasn't so obvious? What if I had only written the start of a sentence and, knowing he was going to get cut off, didn't care or think about how it would have ended? Consider that yourself the next time that happens in something you're reading or listening to and ask yourself whether you believe there was an actual end to the start of whatever sentence just just got interrupted. If nothing else, you can think of funny ways to complete the sentence and amuse yourself for a few glorious seconds.