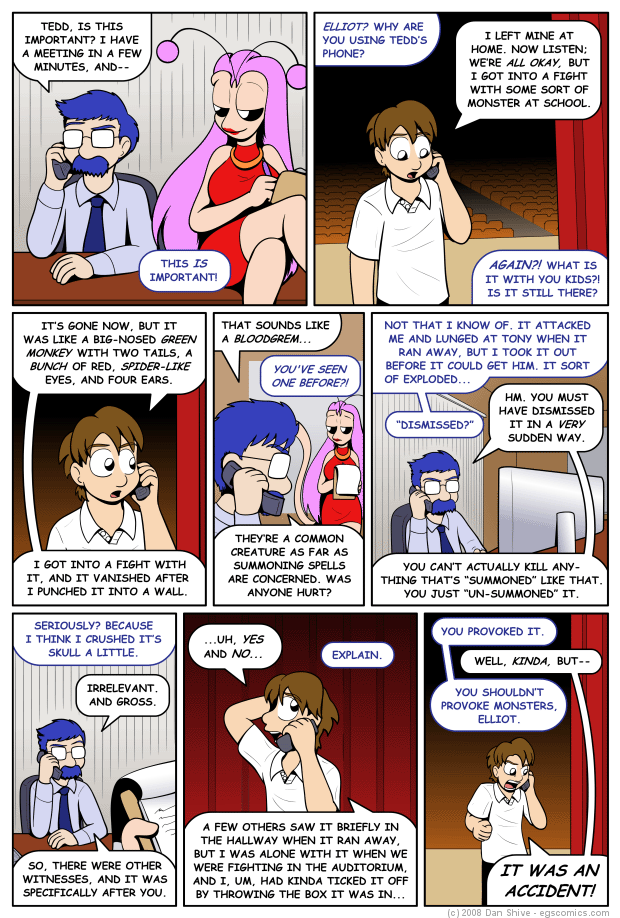 Posted August 27, 2008 at 1:00 am
Elliot was originally going to be in a stairwell during this phone call, but I decided I didn't want to establish a new scene, and particularly not one where I might have to draw several panels with stairs. Given that I'm trying to make the comics in a timely fashion, that could've been a problem, and I wasn't sure how to stage it. I wound up figuring that if the auditorium worked once as a place of privacy, it could work again, and Elliot could reasonably want to check out the general area where he first encountered the Bloodgrem again.

Hooray for Lavender, Mr. Verres's uryuom assistant! An uryuom assistant who has CLEARLY made use of one or more cosmetic morphing devices (CMDs) in her day. I believe her skin would normally be the color that her hair is here, but she's attempting to look close to human, and Uryuoms can shift their coloring any which way they please even without the help of CMDs. As such, it makes sense that she'd make her skin a color other than, well, bubble-gummy.

Lavender was actually going to show up in [[2008-02-12|another shift to Verres's office]], but the two panels shown weren't really adequate for even a silent cameo. Looking at that page, it's also clear that I've changed the design of Verres's office, or that he simply wasn't in his office in that previous page. I attempted to include a joke in the first panel about how it was his new office, or newly refurbished, or whatever. It didn't work particularly well, however, and it really isn't important enough to address within the comic itself.

Incidentally, I recently rediscovered the 90s cartoon [[wp:Animaniacs]], and can't help but think "helloooo, nurse!" when looking at these latest images of Lavender... which is just plain weird on SEVERAL levels.

There are several reasons I like the idea of being able to summon monsters while having those monsters not truly be killable while summoned. One reason is simply that I can bring those monsters back again even if they get brutally taken out, and another is that it allows for more intense, yet relatively lighthearted, combat when the situation calls for it. Given that EGS is primarily a comedy, I consider that a good thing. If I DO want to make the summoned aspect more dramatic, however, there's plenty of ways to make a creature that can come back after being killed again and again creepy.