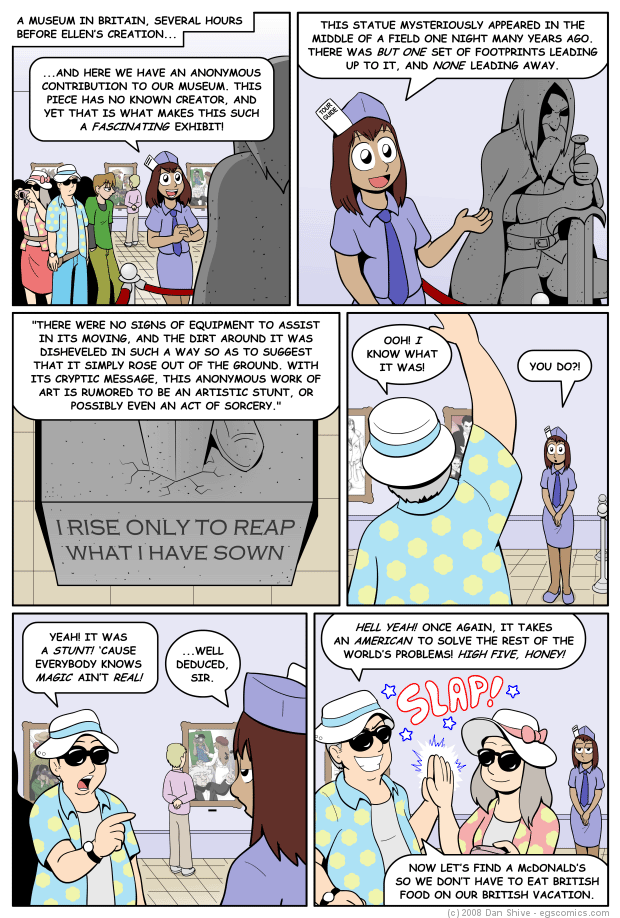 Posted May 26, 2008 at 1:00 am
I did not plan to have a page with a joke poking a bit of fun at my own country on the United State's Memorial Day. If anything, I consider it an unfortunate coincidence. People will disagree on how the military is used at times, but the fact of the matter is that these are groups of men and women who are willing to put their lives on the line in defense of our nation, and Memorial Day honors those who have made the ultimate sacrifice while doing so. They deserve our respect.

That said, the jokes in this comic are intended to make fun of stereotypical tourist behavior, specifically the tourist's expectation of the locals to conform to them and being overly vocal about their pride in their own home while being in someone else's. The McDonald's joke is also poking fun at myself. I visited London with my family when I was still in elementary school, and instead of being eager to sample local cuisine, I was hesitant and sought out dining familiarity. For the record, however, I enjoyed the visit, and particularly liked the [[wp:Tower of London]].

All the "paintings" in this comic are my own drawings. All of them, with the exception of "Anti-Shoplifting Mechanism" (see below), being done for college projects. I figured I wanted to have actual artwork on the walls and that it would need to be at least similar to the EGS style to fit in the EGS universe, so I saw it as a strategic solution. That, and my ego is HUGE. These images can all be found on my Deviant Art account:
[list][*]Raquirrets, top barely visible in panel one.
[*]Arts Center Illustration 1, panels one and Five.
[*]Arts Center Illustration 2, panels one and Five.
[*]Anti-Shoplifting Mechanism, panel four and barely visible in panel six.
[*]Classic Universal Monsters, panel four.[/list]
Final note: if you are not picturing the tour guide with a cute voice and a British accent, FOR SHAME.