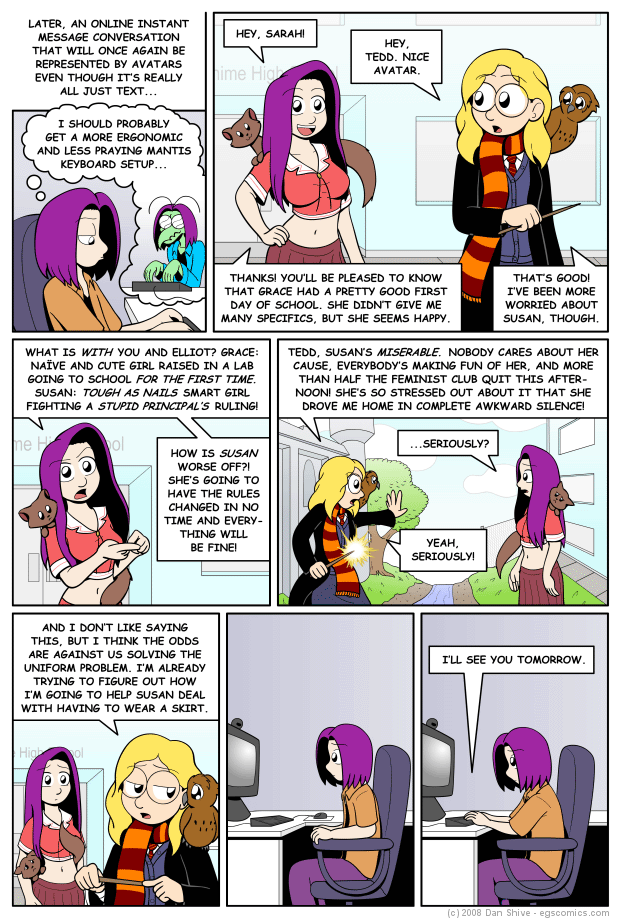 Posted May 23, 2008 at 1:00 am
There have been a lot of Tedd variations this week, haven't there? School uniform Tedd, orange shirt Tedd, Mantis Tedd, and anime schoolgirl (possibly magical?) Tedd. And as an added bonus? Potter Sarah!

...I suppose she could also be called "Harry Sarah", but that just doesn't sound right. Besides, she appears to be some sort of bizarre Harry/Hermione hybrid, anyway. This might suggest that her avatar is the offspring of a fan fic, but I don't see Sarah reading those.

Both Tedd and Sarah have animal companions on this page. What may be less obvious are the similarities between that weird thing on Tedd's shoulder and Grace, and the similarities between that owl and Elliot. The critter on Tedd is a little squirrel-like and is shaded with a lighter version of the color used for Grace's fur, and the Owl is shaded with a lighter version of Elliot's hair while having Elliot's "shark fins" on its head.

I felt the twinge of social responsibility when making this comic. Tedd's computer setup has already been established, and yet it is very clear that it isn't a setup that supports the healthiest posture possible.

Now, Tedd does plenty of things that can't be called "good examples", but most of these are strange enough that I don't have to worry about people being aware of it. In this instance, however, I felt people might see it without knowing he was doing anything wrong. Given how sparse the first panel was anyway, I decided to comment upon it.

Once I added Tedd's cautionary thoughts, the image of Tedd as a praying mantis entered my mind. As someone who used to watch a lot of [[Space Ghost Coast to Coast]], I felt I needed to make this vision a reality.

Panel four contains what I consider to be an optional joke. Tedd was always going to say "seriously", but the "yeah seriously" part was a late addition. It was added upon considering that there is an owl on Sarah's shoulder. If you want to read it as you would a certain [[O_rly|internet meme featuring owls]] saying "o rly?" and "ya rly!", be my guest.