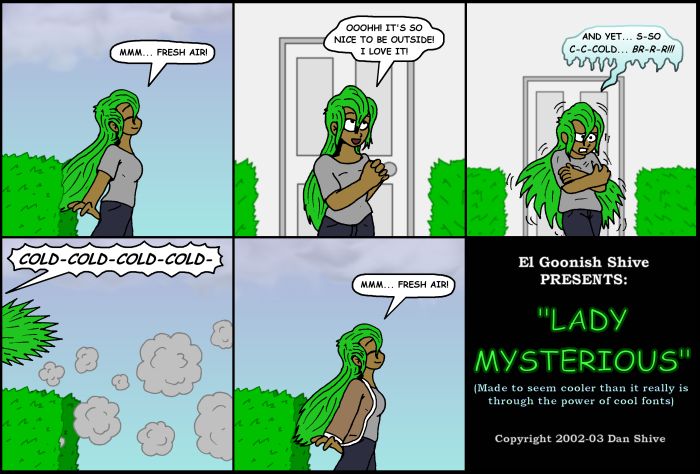 Who is this lady? Why is she so mysterious? And... Annnnnnnd I have a lot of jokes that would basically require me to blurt out who she is, and I don't want to assume everyone's read through the archives already before reading these classic commentaries, so... Hm.

Whoever she is, she does finally address that it's too cold outside for short sleeves! By putting on what appears to be a very light jacket.

That last panel is proof beyond a doubt that I had not yet taken any typography classes. For one thing, making text green and giving it a glow doesn't change what font it is. For another, you don't put quotation marks on a title. For ANOTHER, those aren't actually quotation marks. FOR YET ANOTHER, That's clearly Comic Sans, which is objectively not a cool font. There are other typographical things about it I could nitpick, but I think I've said enough.

That enough said having been said, I really like the "it's cold" dialogue balloon. I would do something similar to that today.