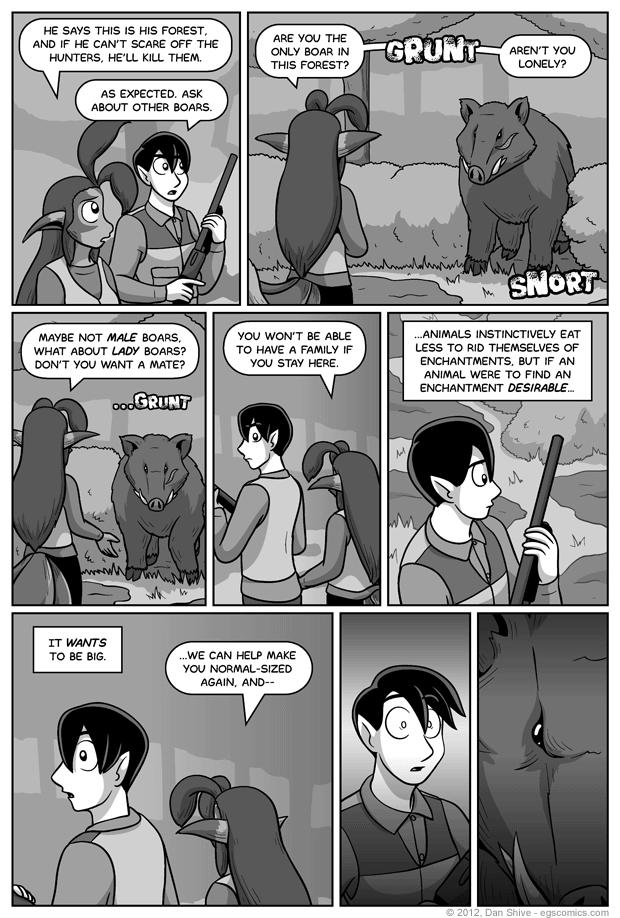 Posted January 31, 2012 at 1:00 am
"As expected"? Seriously, Raven, you could give the boar and the hunters some credit. For all you know, each side could have been planning to have an orderly debate regarding whether they should let the boar live--er, you know what? Nevermind.

This is the closest I've ever gotten to including an uncensored s-bomb into the script. Ultimately, however, I think the comic is better without cracking open that can of worms, and much like how the boar's grunts and snorts don't need translating, I don't think Raven's face in panel seven does, either.

Speaking of which, Grace's translating for Raven in the first panel isn't me backtracking on my decision to not translate the boar's "dialogue". What made the option of showing the boar's dialogue even more of a bad decision was that Grace would naturally wind up translating at least some of it for her boar illiterate companion either way, so in addition to making an already bizarre moment seem sillier (in my opinion), it would be redundant.

Why was I even considering that as an option again? I could read yesterday's commentary to remind myself, but nuts to that. Onward!