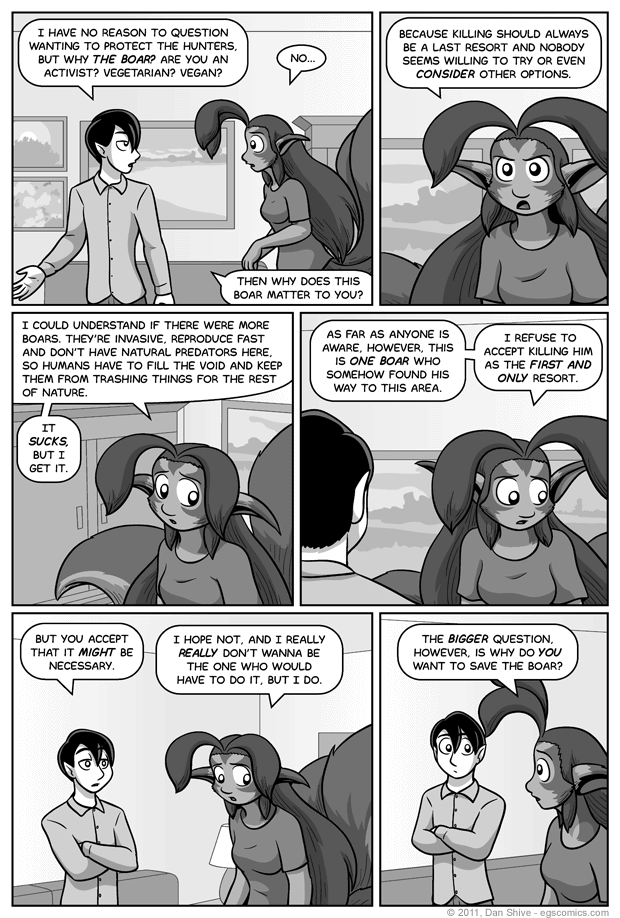 I suspect the vast majority of readers will be in agreement with Grace in the last panel of this comic. While I believe it is important to the story to explore Grace's overall motivation and her understanding of the situation, I doubt most readers would have questioned it had I given "she's Grace" as the only reason.

Grace basically gives the reason I believe hunting, at least in some cases, can be a matter of human obligation. Humans are really good at knocking the food chain out of whack by adding or removing animals from it, and that will really mess up an ecosystem. If humans create a situation where there is no natural predator to keep the populations of other species under control, then we get the grim task of picking up the slack. If we don't, it's just going to damage the ecosystem even further and all of the animals will suffer.

Of course, I completely understand not wanting to hunt. *I* don't want to hunt, and it's not like everybody needs to be out there hunting to keep animal populations under control, and I don't live an area where it's a particularly pressing concern. Still, I have to wonder if I'm going to find myself in a situation someday where the best thing I could do for nature would be to selectively shoot at it.

Also of course (because I apparently like starting paragraphs with "of course" so much), if the food chain is messed up because an animal has been removed from it, a less shooty approach is to try and reintroduce that missing animal. I know this has been attempted in some places with wolves, though I'm not sure how successful or popular that approach has been. As much as I like the idea, I can understand local humans having certain objections to the addition of wolves to what had just recently been a wolf-free environment.