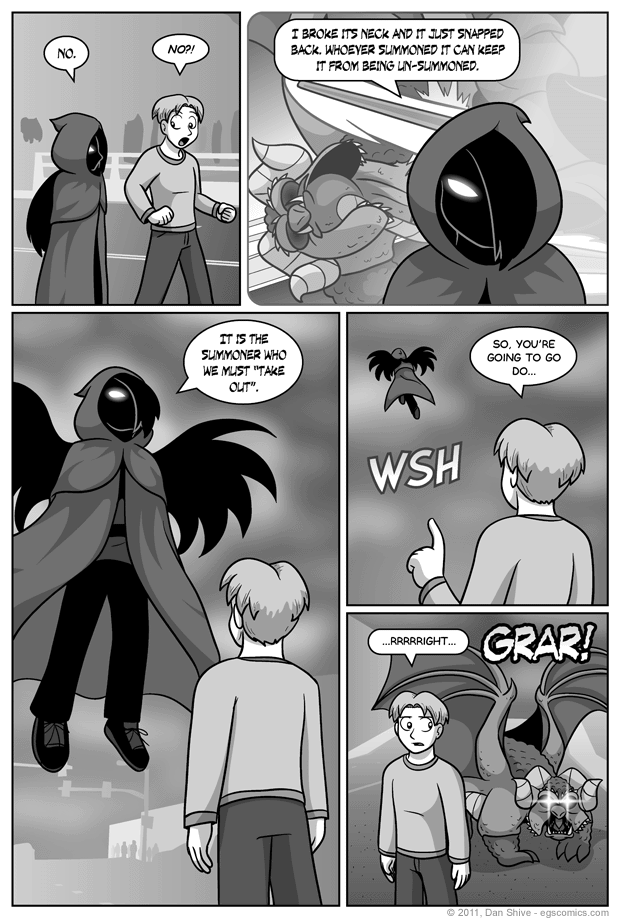 Look on the bright side, Justin. Every time you kick a dragon, you become 20% cooler.

I considered many different ways Noah's flight could manifest. I thought about making his cloak turn into wings, just having him glow, no visual indication other than him glowing, etc. I eventually settled on hair wings on the basis that I consider it both cool and utterly ridiculous, which is pretty much my mission statement around here.

People have gotten back to me regarding tonfas after the commentaries for the past two comics, and I have a whole bunch of videos to sort through and watch. To the point, however, I have now seen footage of both ways Noah's held the tonfas being used, so I was apparently cool with tonfa users until I assumed I wasn't and opened my fat mouth about it.

To quote Lisa Simpson (who may have been quoting something herself): "it is better to remain silent and be thought a fool than open your mouth and remove all doubt."

Of course, if I hadn't opened my mouth, I wouldn't have been sent all those videos and learned stuff, so... yeah. Sorry, gotta disagree with you on that one, Lisa. You may look like a fool at first, but if you actually listen to the people who know what they're talking about when they correct you, you come out of it less of a fool than when you started.

Of course, that's only one interpretation of that quote. The point could be not to pretend you know something when you don't, but it's not my fault if in trying to sound cool the message gets obscured.

Thanks for all the feedback!