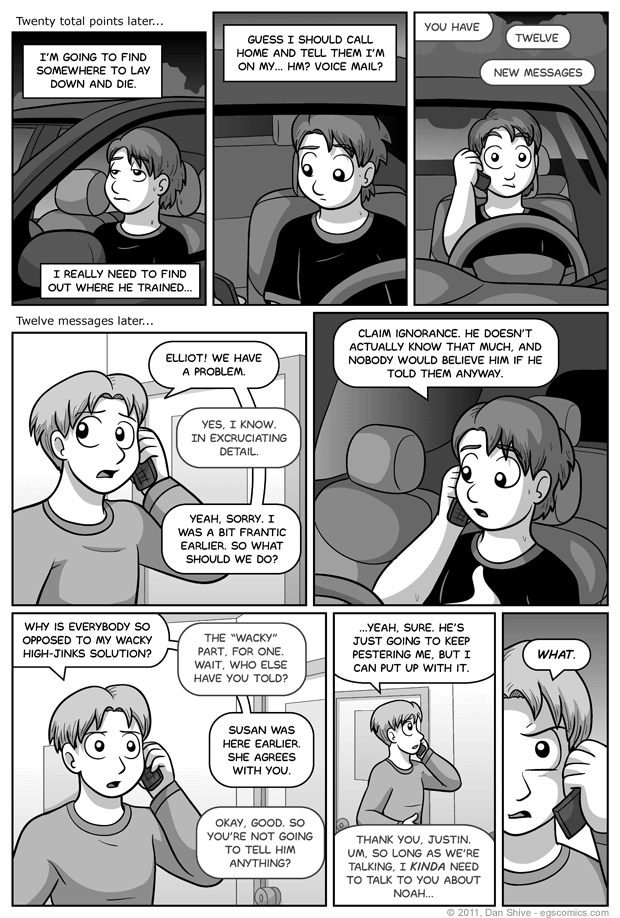 It's my birthday comic! Sort of. Huzzah.

Elliot's possibly jumping to conclusions in panel one. I mean, just because someone's athletic, nimble, and has ridiculous hair doesn't mean they've been trained in some dojo. It's entirely possible that they're some manner of chosen one and/or have a part time job saving princesses on the weekend. I knew a guy like that.. He was nice, but he was annoying to have around at parties because you just knew you weren't going to top his stories.

I'm hoping panel three conveyed what I was going for, which was basically one of those automated messages that's made up of separate recordings. Come to think of it, should "new" and "messages" been separate? I would think that would be one recording, but there's also "skipped" and "saved" messages, but that's still only three variations... Maybe I should check my own voice mail and find out.

WOW. That... that's a lot of missed calls and voice mails. I have GOT to check my cell phone more often... I'm too scared to listen. This will remain a mystery for the ages.

The way I originally wrote this comic, it ended with the "...'wacky' part, for one" line. Then I was trying to prepare the layout and found myself with so much excess space that I decided to include more of the scene in the comic, which worked out well because now it's all cliffhangery, which is a good quality for a Friday comic to have.

I've addressed this before, but I'm going to do it again because it confuses some people who aren't used to this grammatical liberty. Justin's "what" in the last panel ends with a period instead of a question mark on account of his tone. It is a curt "what" and doesn't sound like he's asking something.

This is at least the third time someone in EGS has said "what" in that way, and Justin's second time. Dude's in the lead! WHOO! ...I think. I haven't diligently archive dived in search for more "whats", so there could be more.