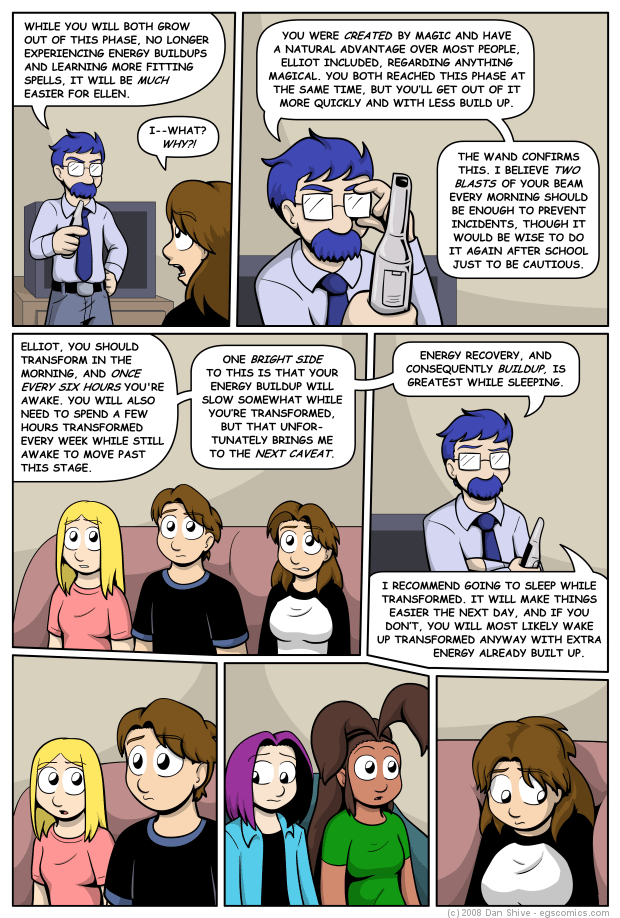 Posted November 22, 2008 at 1:00 am
I drew and edited the text of this comic while sick, so I hereby decree any art mistakes, spelling errors, or characters drawn the wrong genders to be entirely the fault of disease and none of my fault whatsoever. Hooray!

Leading up to this page, many fans questioned what was wrong with Elliot that would make things harder for him, but that was the wrong question. As this comic reveals, and answers, the CORRECT question was "why is it easier for Ellen?" This revelation opens up many possibilities, but its immediate importance is an easier time for Ellen with the unfortunate side effect of major guilt trippage.

I’m aware that the expressions in the last three panels might be a bit hard to read. Well, Ellen’s supposed to look like she’s trying to sink into the couch due to feeling bad, but everyone else’s expressions are intentionally awkward. I don’t want to say too much about what’s going through their individual minds as it should become more apparent on its own with upcoming comics, but I will say that they’re still processing the information and deciding what to do with it.

This page includes several opportunities for cut-away jokes. I could have easily had an uber-magical chibi Ellen in panel two, for example. The reason there aren’t any is the simple fact that the goal of this page is to not make light of how inconvenient this is for Elliot.

There are those who are fans of the idea of self transformation who may not see it that way, but think what it would be like if you didn’t want to transform. What if you had to transform in a way you didn’t want to several times a day, frequently enough that it’d have to be done while in a public place at times, had to spend several hours a week transformed to have any chance of improving your situation, and didn’t even have the luxury of comfortably sleeping in your normal form?

I think Ellen’s feelings of guilt here would be perfectly natural even if she hadn’t been making fun of Elliot earlier. At the very least, it seems perfectly natural to me. I never feel good about having what I would consider to be an unfair advantage. I feel bad if that somehow happens while playing a simple board game; being in Ellen’s shoes would make me feel awful. I’m not saying she’s worse off than Elliot, of course, but that’s kinda where her guilt is coming from. Well, that, and she was making fun of him earlier, but at least she’s feeling remorse.