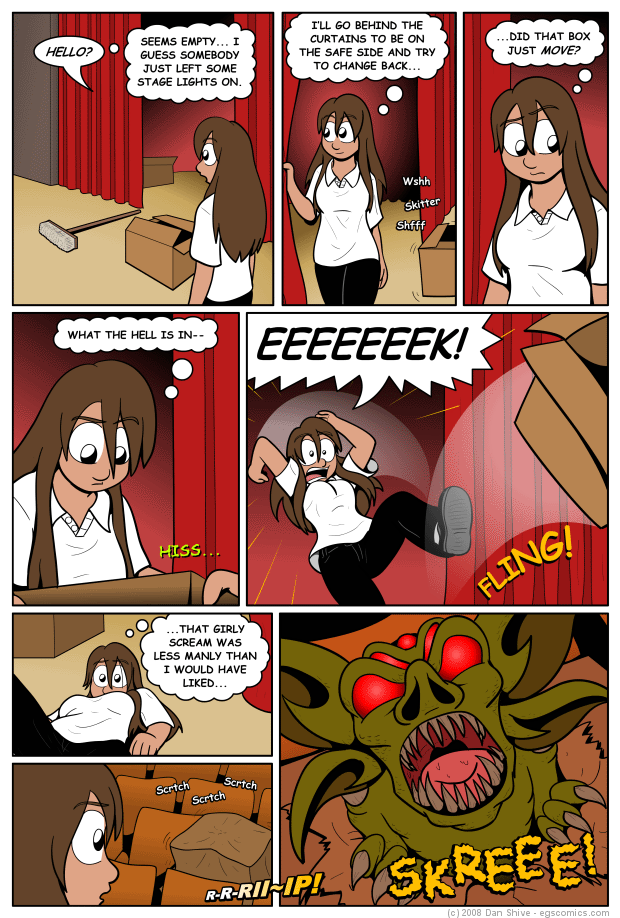 The title is a reference to several video game RPGs I played on the [[wp:Nintendo Entertainment System|Nintendo]] and [[wp:Super Nintendo Entertainment System|Super Nintendo]] where opening a treasure chest could result in a combat situation instead of treasure. I always hated those things, because unless I had played through the game or already been killed by the monster within and had just gotten back from my last save point, there was no chance of me not opening every last treasure chest I found. I think [[wp:Dragon Quest III]] (called Dragon Warrior III in the USA back then) had a class that could detect such chests, but I could just be completely jumbling my video RPG memories.

In my original vision for this comic, Elliot kicked the box. That seemed unnatural to me, though, as she'd have to look in, get back up, then kick, and the entire act of sending the box flying is supposed to be a knee-jerk reaction to being startled. I changed it so she's holding the box when she gets startled and winds up throwing the box in a sort of underhand motion instead. She ALSO originally didn't think "girly scream" and just thought "scream", but I think the more redundant version is funnier.

Speaking of using "she" to refer to Elliot, isn't amazing how complicated and confusing pronoun usage can get while discussing El Goonish Shive?

Anyway, this comic means that it wasn't the Bloodgrem that [[2008-06-23|Nanase sensed by the vents earlier.]] So what the gingersnaps did she sense?

It took a bit of work to get the hue shift just right in the last panel. Not much work, but definitely a bit. I just thought it would be cool for everything to go even more red for the reveal in the last panel.