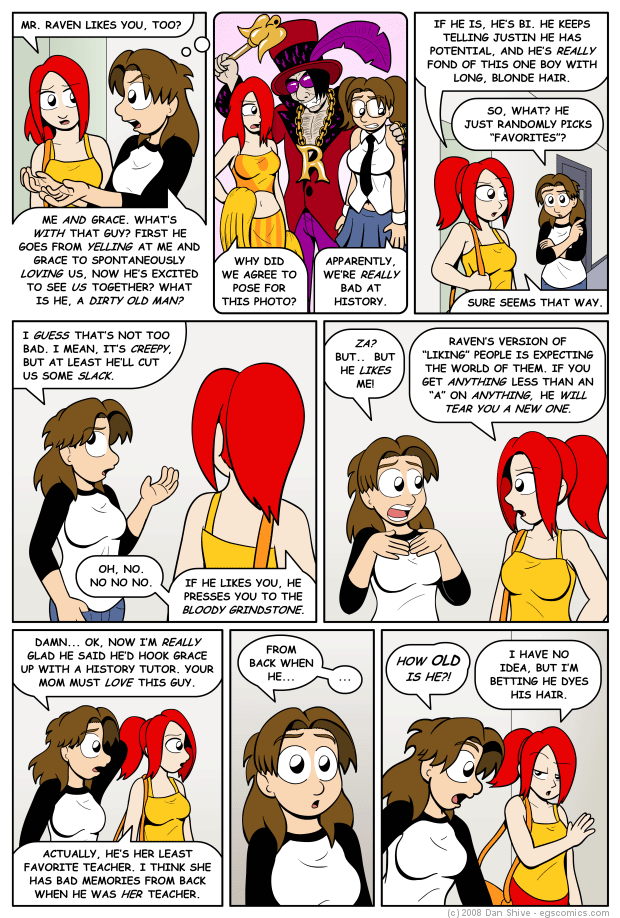 Posted July 2, 2008 at 1:00 am
I have a LOT to say about panel two, but before I get to that, I'd just like to point out that this comic is positively loaded with clues regarding future plot points that it is somewhat ridiculous. I will find it somewhat odd, though not unwelcome, if my forums do not explode as a result of this comic.

Actually, panel two alone is probably enough to blow up the forums. That poor, poor server...

There are limits to what I'll put in EGS, even in fantasy sequences. There are plenty of odd and disturbing things I'd be willing to put in them, such as the sort of things that make shippers glee with delight, but there is a line and this comic almost crossed it.

I really liked the visual of Raven as a pimp. I don't approve of pimping or prostitution in general, but I find the "stereotypical pimp" look hilarious. However, that on its own doesn't really fit the "dirty old man" fantasy. Yes, there can be, and sadly probably are, dirty old men who are pimps, but that's not what I was going for here.

To make the visual work for the context, there needed to be girls included, which was almost a deal breaker. The idea of drawing Ellen and Nanase as hookers, even in a fantasy sequence, sickened me. I almost dropped the "Pimp Raven" panel altogether when I realized I could add a verbal joke to the visual that makes it clear that they're not hookers. This version remains disturbing, but it's not so bad that I have a problem showing it as a fantasy sequence.

Granted, one could argue that posing in such a manner for a better grade is a form of prostitution, but that's arguing semantics. Point is, the fantasy is agreeing to pose, and ONLY pose, for a suggestive photo, and that is within my tolerance levels. Were the scene not a fantasy, that would be a different story.