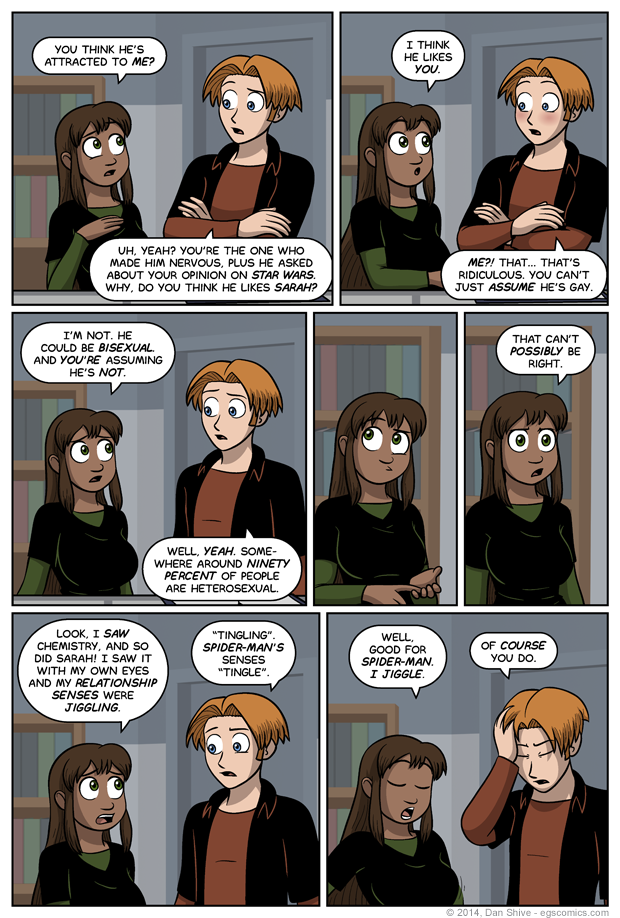 Really, Grace would need to use both hands to count everyone she knows who isn't heterosexual. Possibly a third hand? She knows plenty of people by now and supposedly has jiggling relationship senese. She may need several more arms.

It's possible there are a few reasons why Justin hasn't had a boyfriend yet, and absolutely NONE of them have to do with the comic's pacing. At all. It's all Justin and his assumptions of heterosness. Yep. Definitively and for sure.

On a less "this comic" note, it's last week of July, and the Patreon campaign is less than $15 away from unlocking the final milestone for this month as I write this! Which is pretty early in the day on Sunday. For all I know, the Milestone's been reached. Or maybe someone canceled a large amount. Or a dinosaur demolished the Patreon headquarters. WHATEVER! As of typing, it's about $15 away.

In any case, it pretty much would take the dinosaur option to prevent there being a new EGS:NP and at least four new classic commentaries on Friday (there'll be a few new ones every weekday), so huzzah for that! Announcements will be made at the bottom of story comic commentaries letting everyone know what all's been posted that day.