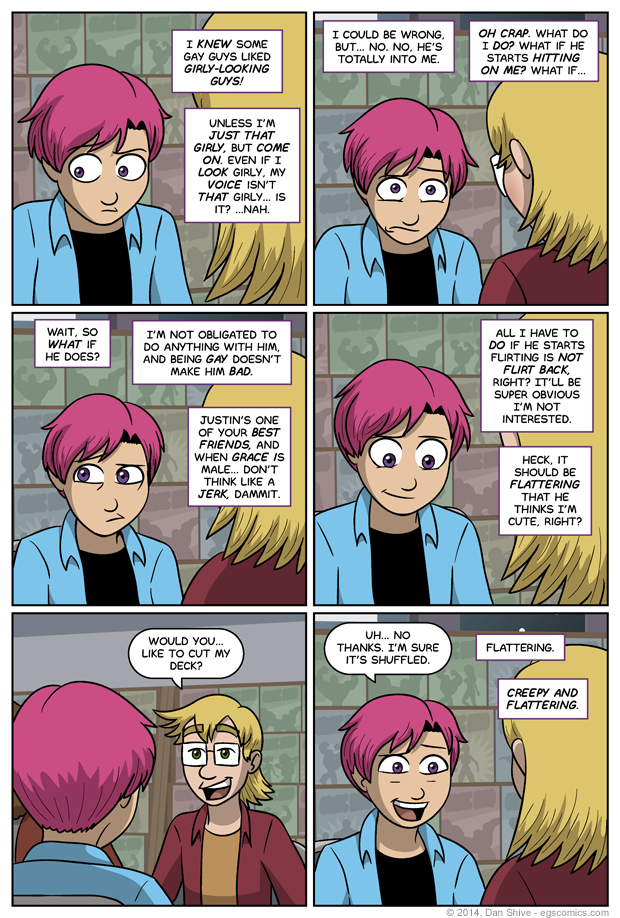 - "You do sound a little weird"
- Attraction to androgynous guys

I'm sure the evening won't get any more awkward.

Tedd's voice is at least androgynous enough that it won't instantly prove his incredible manliness when he's male and won't immediately reveal him to be female if someone has heard him speak before and isn't listening for it. Or isn't particularly insightful. Or a bunch of other exceptions that keep my previous statement from beign absolute.

I don't know if it's an actual tournament rule to allow one's opponent an opportunity to cut their deck after shuffling, but it sure seemed to be the case whenever I played, as everyone expected to be given the option. One thing I'm less sure of is the option to shuffle an opponent's deck after they've shuffled it, which I've also witnessed.

As I type this, I'm pretty sure cutting *is* official, but the shuffling of an opponent's deck before the start of game... I don't know. That's a bit much.

What I do know for certain, and I may have ranted about this before, is that whenever someone grabbed my deck and shuffled it before a game, I considered it incredibly rude and something akin to being shown a middle finger. It was hard to interpret it in any way other than "your shuffling was inadequate and I'm going to do it properly". Were it not a tournament, that would be the point where the game would be over by virtue of my deciding I didn't want to play with them.

That's sort of a downer to end the commentary on, isn't it? DANCE PARTY! EVERYONE DANCE! WOO!