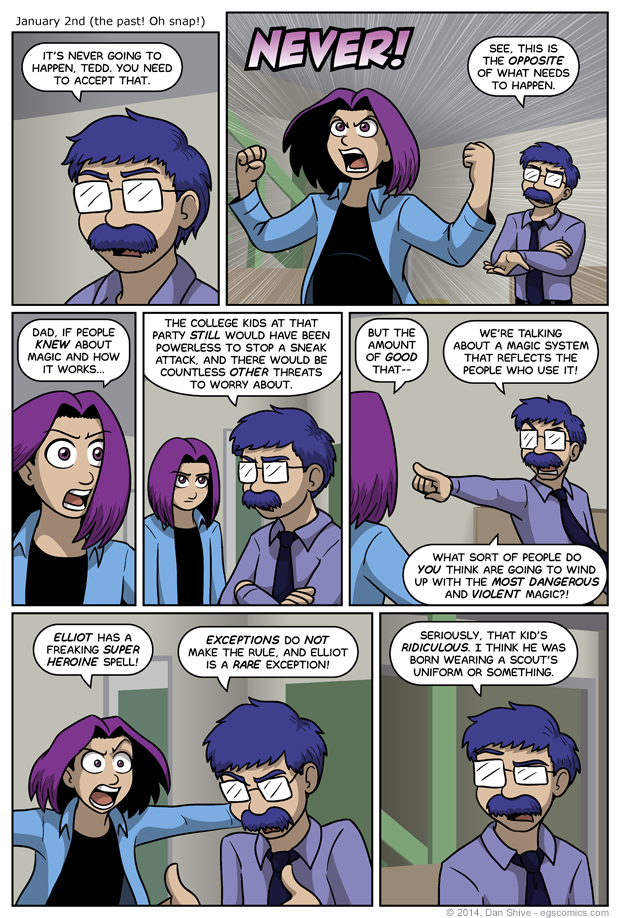 Welcome to the start of a new storyline! A storyline called "Squirrel Prophet" which I initially miswrote as "Squirrel Profit". It's also a new group of comics, but the site doesn't reflect that at time of writing thanks to either me doing something wrong or a technical glitch. I choose to assume the it's interference from space aliens.

And clearly, I have gone mad, as the comic is in color again. I was working on this comic when all of a sudden I was all like "I want this to be in color!" So I colored it.

Coloring this comic added a lot of time to its creation. This is due to something I've talked about in various places before, which is color composition. It doesn't take that many more "clicks" to make a color comic than a greyscale one, but that's not at all what makes it more challenging. The challenge is figuring out which colors to use, and it's the sort of thing that sounds easy to those who haven't had to do it until they try it for themselves and wind up wondering what's gone nightmarishly wrong.

Fortunately, once a palette has been chosen, it's, well, chosen. I can reuse it. There are also a bunch of tools around these days for helping with this sort of thing, and I'm fast running out of excuses to not work in color. I also have to admit that I find the results more satisfying.