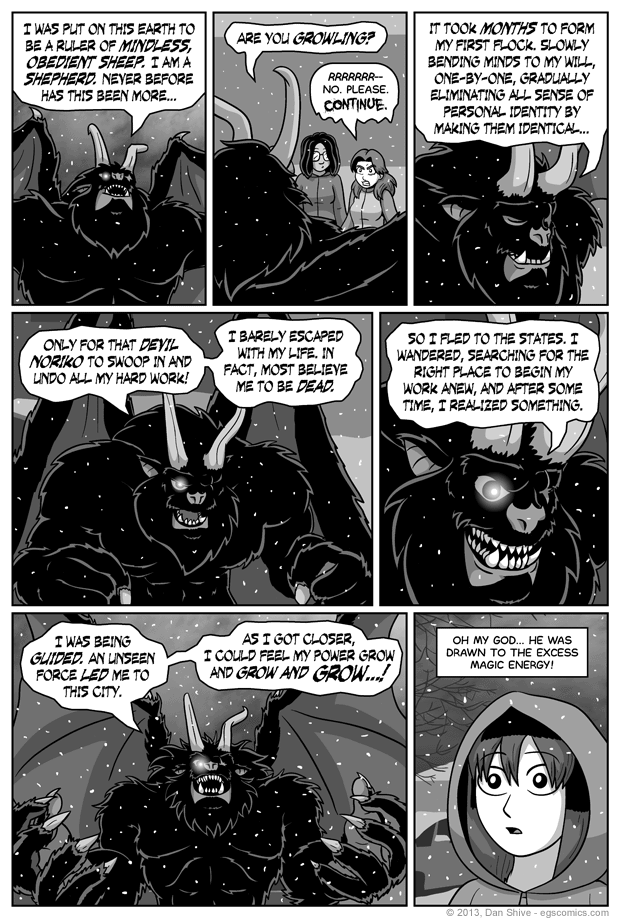 Posted July 16, 2013 at 1:00 am
- The beginning of Tedd's encounter with the inter-dimensional "whale"
- "Many will be drawn to it, even if they know not why."
- Tedd's theories about Nanase's magic (and concern about the excess magic energy in subsequent comics) six months after the whale

I've mentioned on Twitter that I really need to start a tally of how many dangling plot threads this storyline tugs at, and this comic certainly lends credibility to that assertion because heeeeere's another one!

Speaking of things I've previously mentioned on Twitter, Not-Tengu is simultaneously easier and more difficult than most characters to finalize (i.e. complete inking, shading, shadows, etc). On the one hand, his black fur means there are significantly fewer shadows to deal with than most characters. On the other, he has a bunch of fur lines, and the highlights are accomplished by doubling up the lines and creating fill areas, so he can easily have twice as many lines as everybody else.

I'm honestly not sure whether the net result is easier or more difficult overall, but it can certainly get tedious. That said, I really like the end result, so I don't really care. Repetitive inking: Because Not-Tengu's worth it.